You can now enjoy Betfair Poker on your iOS or Android powered devices. Cash games, Jackpot Sit & Go, Twister Sit & Go, Speed Poker, and multi-table tournaments are all available to use from your favorite mobile device.

In addition to being able to play Betfair Poker on the move, the Betfair mobile app gives access to many fun casino games. If you like to bet on sports, you can also download a dedicated sportsbook and betting exchange mobile app. 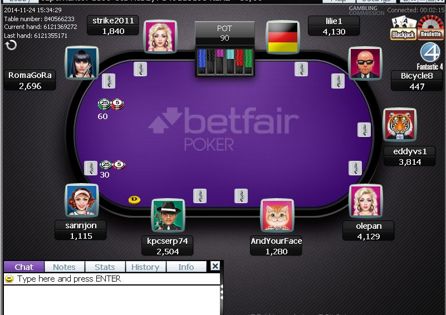 Betfair is one of the biggest and most-trusted names in the online gaming world, one with vast experience and a rock solid reputation. Betfair's sportsbook and betting exchange attract scores of recreational players to the poker tables, and this makes Betfair Poker one of the more potentially lucrative online poker sites you'll play at. 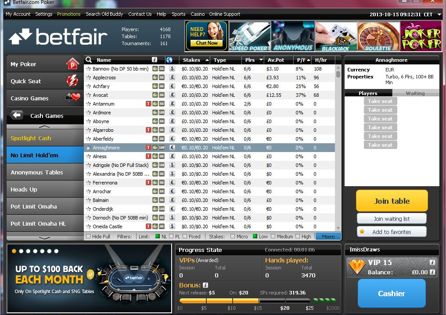 On February 1, 2016, Irish gambling giant Paddy Power Plc and Betfair Plc merged in a deal that created one of the largest gambling companies in world, one valued at more than £4 billion. It goes without saying that this newly merged company is one of the most financially secure in the world and one that can be trusted with your funds.

Betfair Poker runs on the busy iPoker Network, where there are plentiful cash games running all day. The room also features to a busy tournament schedule that awards millions of Euros each month.

What sets Betfair Poker apart from the rest, are its lucrative exclusive promotions and the fact your Betfair Poker account can be used to access Betfair's other products such as the betting exchange, the sportsbook and a wide array of fun and exciting casino games.

Betfair Poker is part of the iPoker Network, which is one of the busiest online poker networks in the world.

Most of the traffic is found at the six-handed no limit hold'em tables, although there is plentiful traffic in the six-handed pot limit Omaha tables, too. All games are naturally busier during the peak European hours of 6:00pm CET to midnight.

Betfair Poker customers can also enjoy Speed Poker, an exciting format that allows you to play hundreds of hands every hour.

Instead of being seated at the same table for the duration of your play, you get to change table and opponents each time you fold.

Don’t like the cards you have been dealt? Simply click on the "speed fold" button to be instantly whisked away to a new table with new opponents and cards! You can do this as frequently as you like until you find hole cards that you are happy to play.

Twister Poker, a special sit and go tournament format, is also available at Betfair Poker. Twister Poker tournaments are played three-handed to a hyper-turbo blind structure and with the prize randomly selected at the start of the tournament.

Right before the first hand is dealt, the software randomly selects a prize pool amount of between twice and 1,000 times the initial buy-in - and the winner-takes-all!

Missions
Each month, Betfair Poker created what it calls missions, which are simple poker-related tasks that players are encouraged to complete such as playing a specific tournament or a certain number of cash games. Completing missions results in tournament tokens being added to your account and adds some value to your play at the site.

Betfair Poker's customer service team can be contacted via email, telephone, via Twitter or through the live chat feature.

However, Before you contact the excellent support team, you can try rectify your problem with the help of Betfair's extensive (and helpful) FAQ section.