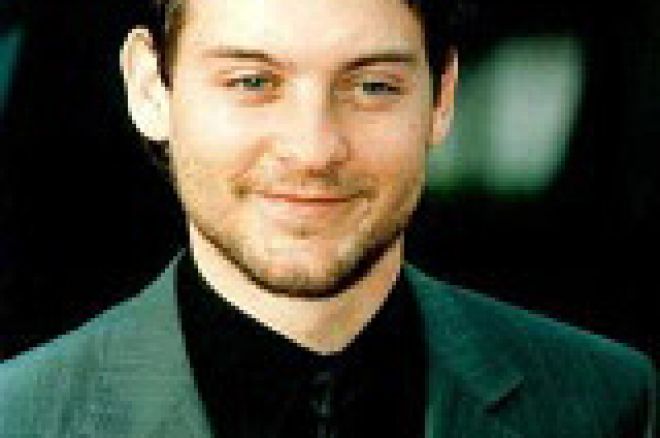 Proving that he can score at the poker tables just as well as the box office, actor Tobey Maguire won his first major poker tournament at Phil Hellmuth's Poker Invitational at the Hollywood Park Casino, a $2,000 buy-in event that netted him $95,480 for first place. The 13-hour tournament event was held on Wednesday, October 27, 2004 as part of the casino's eight annual National Championship of Poker tournament.

The actor outlasted a field of 123 players, with a prize pool of $246,000, including Danny Masterson of That '70s Show. Other players that placed in the tournament include Reza Payvar, Marcel Sabag, Glenn Cozen, George Yutuc, Alex Papachatzakis, Lang Lee, Lance Allred and Stan Goldstein.

Commenting on the tournament, Hellmuth, who has played with the actor before said, "Before the tournament, Tobey told me that he would love for this to be his first tournament win. I am very proud of the way he played the game last night. He showed tremendous focus and determination. I predict that he will become one of the better poker stars."

The Phil Hellmuth Invitation tournament was the eighth of 12 tournament events held during the National Championship of Poker at Hollywood Park Casino. The tournament draws players from across the nation and has an estimated $1 million in prize pool money up for grabs.

Bad Beats and Lucky Draws, from HarperCollins, looks at brilliant plays and mistakes in the poker strategies and the fine art of bluffing by Hellmuth and other top pros. It features blow-by-blow accounts of heart-pounding matches from the Professional Poker Tour, as well as a look back at Hellmuth's early playing days in Madison, Wisconsin before he achieved the distinction of becoming the youngest champion in the history of the World Series of Poker (WSOP). Hellmuth also has an instructional video "Phil Hellmuth's Million Dollar Poker System" launched through Big Vision Entertainment and Masters of Poker.

Phil Hellmuth had his first win in 1989 at age 24, and became the youngest WSOP champ ever. Distinguished by his undeniable charisma and attitude, he now holds a record nine WSOP wins and tops the WSOP money list with over $3.5 million in earnings, making him one of the highest profile poker players in the world. Hellmuth has also scored winning hands as featured guest and commentator on most of ESPN's poker programs, a columnist for Card Player Magazine and a regular on television's #1 rated poker program, The World Poker Tour.