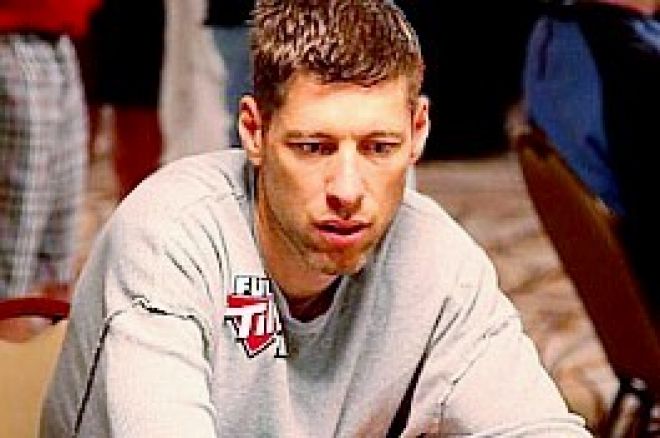 Day 2 of the Event #12, $10,000 World Championship Mixed saw 126 runners play all the way down to 20 survivors as Huck Seed continues his strong run in 2009. The National Heads-Up Champ finished the day atop the leaderboard, which featured Joe Serock as his closest pursuer, but also included such big names as Erich Froehlich, James Van Alstyne, and Allie Prescott among the survivors. An interesting situation that developed late in the day was the resurgence of the first family of poker, as both Doyle and Todd Brunson ended Day 2 among the top ten chip stacks.

But it took a long, long day and 106 eliminations to get to the final 20. Among the early eliminations were a pair of Andys, as Andy Bloch and Andy Black both busted within the first couple of levels. Black returned to the Rio without his impressive beard, but his newfound clean look couldn’t help him win a coinflip against John Hanson when Hanson caught an ace on the flop with

The high-stakes mixed game field featured few women to begin with, and after Katja Thater was sent to the rail, Vanessa Rousso was the last female standing. Thater got into a three-way pot with Yuval Bronshtein and Ville Wahlbeck, and led out on the

flop. Bronshtein raised, Wahlbeck called, and Thater put the last of her chips in for a reraise. Bronshtein flat-called Thater’s all-in, but Wahlbeck popped it up once more, and Bronshtein called. The

hit the turn, and Bronshtein check-called Wahlbeck’s bet into the side pot. The river brought the

and Wahlbeck bet out one last time, prompting a fold from Bronshtein. Wahlbeck tabled

for a straight-flush wheel, good enough to send Thater packing. The tournament was a less attractive place for her departure, and became even less so a few minutes later when Vanessa Rousso joined her on the rail to leave a boy’s club in their wake.

As the money bubble neared, more and more pros headed to the rail. Other notable eliminations on Day 2 included Howard Lederer, Jimmy Fricke, Daniel Negreanu, Hasan Habib, and Gavin Smith. Peter Gelencser was the unfortunate bubble boy when he was sent packing in 25th place at the hands of Joe Serock. Serock moved all in over the top of Gelencser’s preflop raise with pocket queens, and Gelencser made the call with

. The board ran out jack-high, and the remaining 24 players were all guaranteed a profit.

One of the biggest stories of Day 2 was the resurgence of Doyle Brunson, as the living legend went from a dangerously diminutive stack to a big stack in the space of only a few hands. First, he saw a three-way flop with Mikael Thuritz and Eric Froehlich in Omaha hi/lo. The flop came down

, and Brunson led out. Both opponents called, and the three players saw the turn card fall

hit the river, and again got two callers. Brunson tabled

for the queen-high straight, prompting Froehlich and Thuritz to both muck. Shortly after that, Brunson sent David Oppenheim packing in a stud hand when he rivered a flush to add Oppenheim’s chips to his ever-growing stack. It wasn’t long after that when he busted Alexander Jung in a razz hand to move into the top ten in chips and prove that the late hour was not a challenge to him.

The bubble burst just before the end of Day 2, but several players still found opportunity to bust out before the last pots were scooped. Max Pescatori was one of those, felted in 24th place at the hands of Matt Hawrilenko. He was joined on the rail by late eliminations Brian Mizok (23rd) Harris Pavlou (22nd) and $40,000 No-Limit Hold’em champ Vitaly Lunkin (21st). Each of the four players earned $16,649 for his efforts.

Join PokerNews at 2PM local time for all the live updates from the WSOP.

Play in Event #11, $2,000 No Limit Hold’em resumed on Day 2 close to the bubble, as 232 players made it through Day 1, but only 171 of them would collect any cash. It didn’t take long for the bubble to burst, with the low buy-in and crowded field combining for plenty of fireworks on the felt. By the time tournament officials stopped the carnage at 3AM, only 25 players remained, with Mike Carlson holding the edge in the chip counts with 858,000.

The bubble may have popped quickly, but hand-for-hand play stretched almost interminably – especially for the players who realized that the next break in the event was on hold until the bubble burst. Finally, as bathroom-needy players were squirming in their seats, Mandy Baker became the bubble girl with a tough river beat. Baker moved all in preflop with

, and Cody Shedd called from the big blind with

. The flop missed both players as it came down

, and Baker held the lead through the

on the river did her in, however, and she was done in 172nd place.

Baker’s elimination, and the bursting of the bubble, meant that Phil Hellmuth had (once again) broken his own record for lifetime WSOP cashes. Hellmuth logged his 70th career cash in Event #11, maintaining a solid lead over Men “The Master” Nguyen in second place.

Even though the pace of play picked up after the bubble, it still took several hours to thin the field enough to halt Day 2. Among the post-bubble eliminations was Maria “Maridu” Mayrinck, who was sent home at the hands of Mark Tarich. Sports announcer Bruce Buffer cashed in the event, but soon after the bubble burst he rumbled with Patrick Stemper, holding pocket nines to Stemper’s

, and lost the race on the river when the board read

. Other notable Day 2 eliminations included Tom Franklin, T.J. Cloutier, Perry Friedman, and Jason Mercier. Champions’ Invitational winner Tom McEvoy also cashed, but didn’t make it through to Day 3, getting the hook near the end of the evening.

As always, Phil Hellmuth’s entrances are only outshined by his exits, and he exited Event #11 in spectacular fashion. After a run of cold cards ate deep into his stack, Hellmuth called off the last of his chips with

after Jim Geary moved all in from the small blind. Geary showed

for the coin toss, but he won the hand in particularly dramatic fashion. The flop of

was only marginally interesting, as Geary still needed a lot of help to bust Hellmuth. Some of that help arrived when the

hit the turn to give Geary extra straight outs, and the

on the river meant that Geary had hit runner-runner Broadway for the win, a fact that Hellmuth shared with many people as he made his exit.

Even with Hellmuth’s chips added to his stack, Geary only finished Day 2 in the middle of the pack. Mike Carlson finished the day atop the leaderboard, as Chris Taylor, Adam Adler, and Scott Hall all bagged up significant chips. Join PokerNews at noon local time as the remaining 25 players take their shots at WSOP gold.