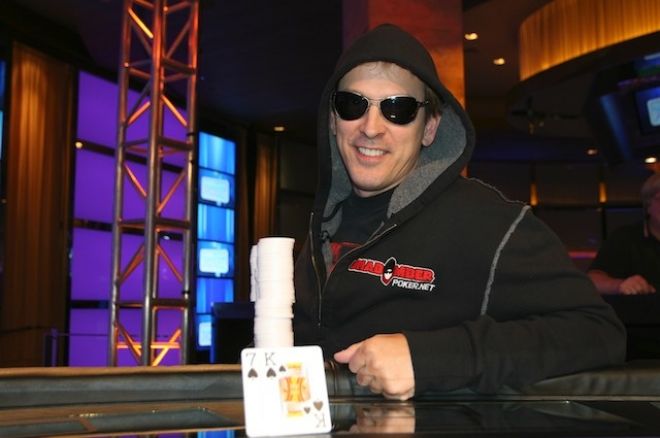 The first heat of the PartyPoker Premier League IV wrapped up after about eight hours Friday with Phil Laak emerging victorious. Laak faced off against an extremely tough field, besting Daniel Negreanu, Ian Frazer, Luke Schwartz, Roland De Wolfe, Vanessa Rousso, JC Tran and Yevgeniy Timoshenko all of whom came prepared for battle and gave their best shots. None of them could see to match the good fortune and good timing that Laak brought to the table.

Laak flopped numerous sets and came from behind in key pots to amass a very large stack early on. It seemed like "The Unabomber" could do no wrong. The last hand of the night was no different with Laak and Tran getting all the money in, Laak holding

. The board rolled out

and Laak once again was able to claim the pot with the inferior hand.

For winning the first heat, Laak will take home $32,000 and lock up 16 points. The win and those points should go a very long way in helping Laak secure a place at the final table, which is based on the top point earners during the six scheduled heats.

While Laak is sitting pretty after heat 1, Negreanu, on the other hand, has dug himself a little hole. Unable to get anything going, Negreanu was the first player eliminated and didn't earn any points. The rest of the standings look this:

The next heat will begin Saturday at 12:00 p.m. at the M Resort in Las Vegas and Laak, along with JC Tran, Roland De Wolfe, Yevgeniy Timoshenko will be back, this time battling it out against Tony G, Phil Hellmuth, David Beyanmine, and the PartyPoker qualifier Giovanni Safina. Be sure to follow all the action live at PokerNews.