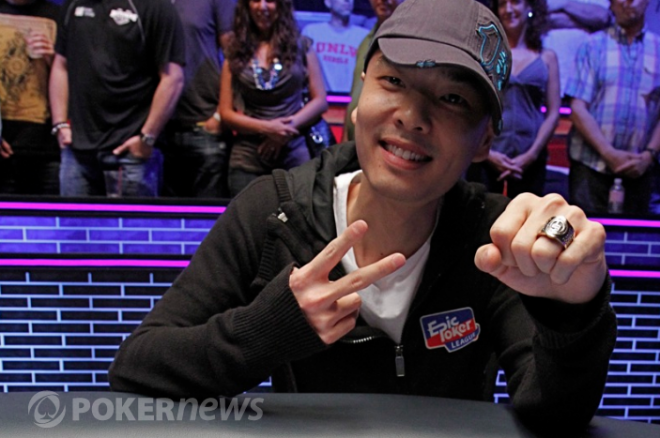 Last week, the Epic Poker League held its inaugural $20,000 Main Event at the Palms Casino in Las Vegas. The tournament attracted 137 players and created a prize pool of $3,085,200 with a smooth $1,000,000 reserved for first. That prize was captured by former November Niner David “Chino” Rheem, who was making headlines of his own outside the EPL.

As we reported shortly before the conclusion of EPL’s first Main Event, Rheem had come under fire in the poker community when he was called out by Will Molson in the TwoPlusTwo forums as being a scammer and welsher. Molson’s sentiments were soon echoed by other poker pros such as Ben Lamb, Tom Dwan, and Joseph Cheong, tarnishing Rheem’s reputation in the process. While Rheem did go on to win the event, it may have been too little, too late.

Apparently, Rheem did not take home $1,000,000 because he was backed for 70 percent (many in the forums speculate by Rheem’s One Drop hat that his backer was the founder of that charity, Guy Laliberté) and 10 percent was reserved for charity (as part of the staking agreement). That left Rheem with 20 percent, perhaps less because it was rumored he had swapped 8 to 10 percent with another participant in the tournament. If that were true, Rheem would have earned $120,000 for his win.

Based upon eyewitness accounts, including that of Donnie Peters from our very own Live Reporting Team who were on hand to cover the event, there was a long list of creditors waiting for Rheem at the payout cage after his win. Apparently, most players were only paid 10 percent to 20 percent of what they were owed, while a few like Lamb and allegedly Erik Cajelais were paid in full, with the latter supposedly causing a bit of a scene at the cage in order to get paid by Rheem.

As a result of his conduct, many of Rheem’s critics have called for him to be banned from the EPL because his actions are contradictory to the published Code of Conduct. As such, several formal complaints were filed asking that the EPL Standards and Conduct Committee hold a hearing to sort through the controversy. On Monday, August 15, 2011, that hearing was held. The EPL released a statement Friday.

During the formation of the Epic Poker League, the Standards & Conduct Committee made a policy decision that any personal conduct that occurred prior to the League’s formation would not affect initial eligibility of a league member. The Committee, however, communicated to the League members that subsequent to the start of League play, the Committee would enforce discipline against any League member who violated the League policies, including the Players' Code of Conduct, or the law. As a result of ongoing personal financial obligations incurred prior to the League's formation but impacting the League during the Inaugural Epic Poker League Main Event, the Committee has voted to place David “Chino” Rheem on probation in order to effectively monitor the personal conduct of Mr. Rheem as he works to meet his personal financial obligations as required under the Players' Code of Conduct. Under the integrity and Honor principles of the Player's Code, meeting "financial responsibilities on time and honoring contractual agreements" is required to maintain eligibility. In reaching its decision, the Committee recognized that Mr. Rheem used best efforts and all of the proceeds he personally received from winning the Inaugural Epic Poker League Main Event to partially satisfy outstanding financial obligations.

By order of the Committee, Mr. Rheem must continue to proactively repay his outstanding debts by, from this point forward, using any and all proceeds Mr. Rheem personally receives from personal poker winnings worldwide to satisfy all of his remaining financial obligations in an orderly fashion. In addition, Mr. Rheem must continue to report to the Committee regarding his compliance with the terms of his probation. The probation period will remain in effect until Mr. Rheem has satisfied his pre‐league formation financial obligations. Failure to do so or any subsequent violations of league policies or the law by Mr. Rheem will result in immediate suspension of Mr. Rheem from the League.

PokerNews recently sat down with Stephen Martin, an Independent Ethics Advisor and Chair of the Standards and Conduct Committee, to sort through some of the rumors and find out the EPL’s official stance regarding Rheem.

Can you confirm that there was a meeting held this past Monday with the EPL Standards and Conduct Committee regarding David “Chino” Rheem?

Was that meeting a result of a formal complaint filed? If so, can you enlighten us as to who filed the complaint?

It was. There were several people who contacted the Standards and Conduct Committee in regards to Mr. Rheem and potential financial obligations that he had.

What was the Committee’s ultimate decision regarding Rheem?

The Committee voted to place David Rheem on probation based on the rules of the Epic Poker League, and as part of the probation, the league ordered certain steps and things he would have to take going forward to maintain eligibility to play in the league.

Would one of those steps be making good on debts he currently has with players?

Yes. So the probation will remain in effect until he satisfies all his pre-league debt obligations. One of the keys, as we discussed this with the committee, was we made the decision as a league that we were not going to discipline pre-league conduct, meaning if you did something before the launch of the league we were not going to impose discipline upon people. We didn’t think that was the right thing to do, you know people were not in the league, they were not part of the rules, until the point that the play had initiate. But because Mr. Rheem’s pre-league conduct impacted the league after play began and caused issues obviously both at the event and throughout the poker community, we decided to take action.

We understand that for his big win, Rheem was actually backed in the event. Are you able to confirm that?

Yes. Our understanding in the league is that he did have a backing relationship with an individual, and the amount of money that he personally received from his win was significantly less than what he had been paid for winning the Main Event.

Does the EPL ensure that backers are paid out immediately?

No, that again is the individual’s personal financial relationships and what he has to do. We can’t be a debt collector, we can’t pay money to other individuals other than the ones who compete in our events and win the prizes. We can take action against players, based on their eligibility to play, for any number of types of conduct including not meeting financial obligations when there is a paid and financial backer, whether it’s loans between individuals, etc.

There have been reports that after his win, there were players waiting for Rheem at the payout cage and that the Palms/EPL has security there to ensure that it was a peaceful situation. Is that true?

I was not there personally at that time, so I don’t have any personal knowledge of it, but my understanding from talking with people from the league is that there was security there. It was not EPL security, it was the Palms’ security, and that there were players waiting to get paid out. There were discussions that occurred outside of the league between Mr. Rheem and people that he owed debts to, or a financial obligation to, and some of those were satisfied at that point.

Is it true there was an incident at the cage involving Rheem and Erik Cajelais, another EPL cardholder, in which the latter became quite vocal? If so, will there be any consequences for Cajelais as a cardholder?

I won’t make any statements about this player’s action or discussions that take place with the committee until which time they might be public. As a general matter, personal conduct by any league member, whether in the tournaments or outside the tournaments, is subject to regulation by the league for improper conduct.

Given that Rheem is on a probationary period until all his past debts are satisfied, how is it that the Standards and Conduct Committee or the EPL will know of all these past debts? Did Rheem volunteer them? Did some pros step forward? How will you know that they’ve all been satisfied?

What we’ve made clear with Mr. Rheem is that if he does not pay those off, does not take action to satisfy all the debts, or violates the conduct code in any other manner, he will be suspended immediately.

Is there anything else that you’d like to add?

Yes. In the media statement you will see a very clear description of all of this. I think the important points are with Chino, his actions occurred before the league started, but because we had some negative impact on the league, league members decided to take action. We had made a decision as a league not to take action, generally, about the pre-conduct . . . but as soon as the cards dropped, we will take both tournament and outside conduct into consideration in disciplining players.

He has to proactively repay all of his debts, and he has to do that from any personal poker winnings worldwide he receives until all his remaining financial obligations are paid, and it has to be done in an orderly fashion because we want to avoid having a situation as you’ve described earlier.

He understands that he’ll be immediately suspended if he doesn’t do this, and if he doesn’t continue to report to the Committee on the status of this, and that we expect that he will satisfy those debts. We would hope that people that he owes money to will understand the fact that he is still playing in the league will give them, potentially, a better opportunity to recoup the money, but also because the league has stepped in and is now actively monitoring this situation which provides for maybe a more orderly way for Mr. Rheem to satisfy these issues [rather than] having people have to track him down and wait for him outside of tournaments.

There are some substantial issues for Mr. Rheem. If he gets kicked out of the league, he can’t play and won’t be eligible for the $1 million freeroll. You know, he’s obviously a leader in our tournament standings so far, so there are some pretty big financial incentives for him to continue to do the right thing.

*PokerNews has attempted to contact Rheem, but has received no response.