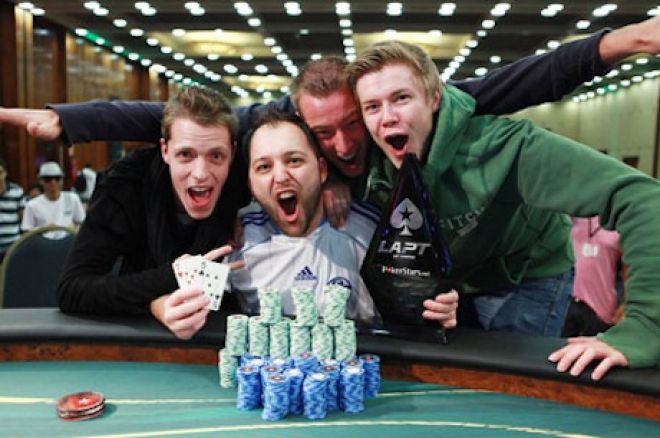 Season 4 of the PokerStars.net Latin American Poker Tour concluded this week with Daniele Nestola taking home the title. The timing for the Grand Final in Brazil could not have been better. In a country that needs no excuse for a party, there's no better excuse for a party than Carnival, and it arrived alongside the Grand Final in full confetti and papier-mache regalia. It's the biggest week of the year on the Brazilian calendar, and it came paired with the nation's most prestigious poker tournament. A total of 367 players paid 4,000 reais apiece for a ticket to LAPT São Paulo, and the four-day event culminated in Monday's final table.

The marriage of poker and party brought notables from as far away as Canada and Northern Europe, and the temptations were even enough to lure Daniel Negreanu to play. His influence has spread far south of the equator, and his presence alone put a notable mark on Brazilian poker. Luckily enough for fans gathered ringside, Negreanu was chatty and playing mostly fantastic poker, and he picked his way all the way through the field and into the final eight.

Daniele Nestola began the final table as the big stack and wasted no time wielding that in a pot that ended the run of Argentina's Juan Gonzalez. They were playing 12,000/24,000/3,000 when there was a raise and a flat-call in front of Nestola's small blind and decided to squeeze in a reraise from 54,000 to 148,000. In the big blind, Gonzalez four-bet shoved for 549,000 holding

. The other two players folded out of the way, but Nestola called with

, and the race was on. The board ran

, and the early quads were the first sign that the day would belong to Nestola. Gonzalez was the first player to fall in his wake, earning R$26,340 for eighth place.

The final Brazilian fell in seventh place when Vitor Torres lost the last of his chips. He's an imposing man at the table, but his short stack found him shoving

flop was not at all good news for the native and was awarded R$35,560 as he left the stage to a warm ovation.

Negreanu was down in the realm of 20 to 25 big blinds as the blinds went up in the second level of the day and made it clear that he was playing for the win. Unfortunately, his first bid for a double went afoul at the hands of Carlos Ibarra. Negreanu was the preflop raiser, and Ibarra called in late position to go heads-up to the flop. When it came

, Negreanu continued out for 102,000. Ibarra wanted to play for 300,000 though, and his raise effectively put "Kid Poker" to a decision for all his chips. Negreanu had 575,000 left behind, and he chatted up Ibarra a bit before committing with

. Ibarra had been working with

though, and Negreanu was two cards from the exit. The turn

were no use, and Negreanu's sixth-place consolation prize was R$48,730.

That put Ibarra within striking distance of Nestola's chip-leading stack, and the two men traded spots a couple of times before Nestola really began to turn the screws. He found the same

Ibarra had used to tally a knockout of his own, and it earned him the bounty of Ecuador's Jonathan Markovits. The latter stuck his short stack in with the respectable

, but he could not overcome Nestola's rockets, leaving in fifth place with R$64,540.

Morbiducci, from Chile, was the next to run aground at Nestola's expense when the two got it in with

respectively. Morbiducci had his tournament momentarily extended by the

flop, but the turn

drew Nestola right back into the lead. The river was the

, and the blank sent the first of two Chileans off to the exit in fourth place with R$89,570.

Gaspernio Nicolas had been biding his time as the price of poker had been growing, and he really began to mount a charge during three-handed play. He overtook Nestola briefly, but his time at the top was short-lived. Nestola once again found those friendly

in a big pot against Nicolas, and the Nestola's chip lead began to grow once again as he knocked his opponent down a notch.

Nicolas managed to take care of Ibarra, the other Chilean, in third place, but he was still facing an uphill battle. Ibarra's elimination came when he bluff-shoved his short stack with

was good enough to send him on his way, and he earned the first six-figure payout with a check for R$148,840 and a respectable third-place result.

Nestola and Nicolas agreed to chop R$500,000 of the remaining prize pool in half and play for the remaining R$39,300, and it didn't take long at all for Nestola to claim that remainder and the trophy. The heads-up battle was short and lopsided, and it was a seemingly innocent limped pot that ended the day. Nicolas flopped top pair with

, and Nestola called a bet with his

drawing at the open-ender. The

came right on fourth street, and the rest of the money got in right there. Nicolas was already drawing dead to the

river, and he took a quarter-million Reais back home to Venezuela with him.

From start to finish, the whole tournament took just over four hours, and Nestola was likely headed out for a night of partying Carnival-style in the streets of São Paulo. He has 289,300 reasons to celebrate, and he was smiling broadly as he posed for his winner photo with the winning hand, the trophy, and all the chips.

Still hungry for live reporting? Check out the updates from EPT Copenhagen. Follow PokerNews on Twitter for up-to-the-minute news.