Pro Blogs: On Risk: A Magic Ninja by Alec Torelli 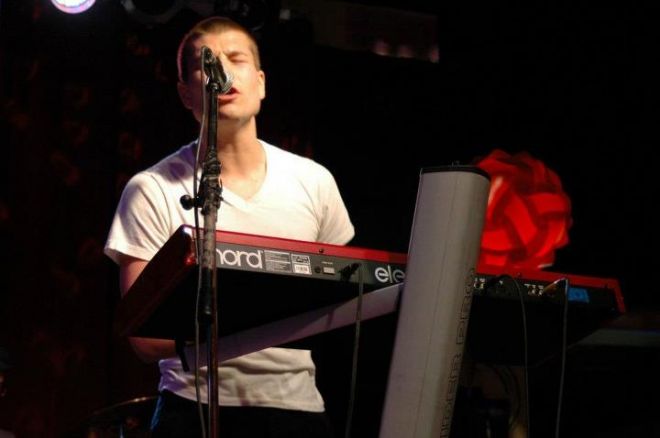 “You say I’m washed up but you never learned to swim/ If I drown beneath the ocean, it's cos I didn’t save anything / for the way back”  — Alexei Martov

It began with a dream. At 6:30 a.m., after another all-night poker session, the sun shined in through the window. Martin “MagicNinja” Bradstreet got into bed, and turned on the TV. A Muse concert was airing. “I remember thinking how playing on stage would probably be the most awesome thing in the world,” Martin, aka "alexeimartov," recalls in his post "Chasin shootin stars" on the website TwoPlusTwo. It was then that he had an epiphany. “There was no fundamental difference between the person on the stage and myself. If I wanted it bad enough, I could do that.” There was only one problem. Martin couldn’t sing or play the guitar.

Some would call him an over confident 20-year-old with delusions of grandeur, but Martin believes that most obstacles are caused by inaction. “People get paralyzed because they don’t want to make decisions," he told me in a recent phone conversation. "Especially when they aren’t sure which one is best." One of the biggest things I’ve taken from poker is the ability to analyze things quickly, act on them and make the best of a shitty situation. And in life, you need all that.

Six years ago Martin’s situation was, by all definitions, shitty. He was $180,000 in debt to his brother, yet his approach to the circumstances remained calm. “Anyone can make money while they’re winning, but it’s how you act when you’re dealt the worst river in the deck that defines you. And in music, shit always hits the fan.”

Martin implemented what he had learned: he started to act. The next morning, he picked up the guitar and, for the first time since he was a child, he pursued his lifelong dream of being a rock star. “I began by learning classical, which is the ‘game theory’ approach to singing — the math of music.” In addition to practicing every day for the next four years, Martin surrounded himself with successful musicians. “I met a girl who was a great singer and we started hanging out, playing White Stripes songs together,” he said. Shortly after he played his first live show at a bar called “Burritoville,” he actively began searching for members for a band.

The levels of a musician are similar to the ranks in poker. Martin still considers himself a small stakes grinder. “Playing $0.25/$0.50 is like playing in that open mic at ‘Burritoville,” he told me. “Playing $0.50/$1 is being in front of a larger group. Playing $1/$2, which is where I’m at now, is making a record.” However, there is one core difference between music and poker — the uncompromising amount of time it takes to progress.

“In poker, you can sit down and play with Phil Ivey just because you have money. In music, it’s not like that. You can’t start playing with Green Day; even if you’re the best guitarist in the world.”

In the two years since their inception, Martin and his band “Alexei Martov” have played in numerous venues, including a rendition of the Canadian National Anthem for a hockey team in Martin’s home town, Montreal. An awakening mixture of Muse and Led Zeplin, Alexei Martov has released their first EP, which is available for download.

Their plans for the future? “We’re doing our first international tour,” he said with a hint of hesitation. “We got invited to tour with a group who’s much better than we are and as it turns out, I’m going to spend the majority of the time solo. I’m not sure that I’m ready, but I have to make the most out of it.” He compares the situation to poker. “It’s like being a $0.50/$1 player and someone offering you to live in their house, staking you for $50,000 and bumping you up to $2/$4. You may not be ready, but how can you pass that up?”

His first show is this July.

Martin’s decision to pursue music has come with its fair share of criticism. “People think that, because I have personal freedom from poker, it somehow makes being a musician easy. And sure that’s true, but how many people who are about to get made partner in their law firm walk away from it to do something else, simply because they have enough money to pursue their dream?” Letting go is never easy. “It’s hard going from the upper echelon of an industry to promoting a concert hoping that 60 people will show up to pay a $5 cover. The weirdest part,” he confesses, “is that this is more challenging.”

Martin’s audaciousness is not mere coincidence. “The things I’m good at in life are largely a result of being good at poker,” he says. As a professional player, tolerating risk became second nature. The game’s fundamental skill involves synthesizing information, weighing the costs and benefits of a situation, and determining the best possible outcome. It happens in every hand. As a result, one familiarizes themselves with risk. Instead of being afraid of taking chances, they embrace the unknown.

Uncertainty creates excitement — one gets used to betting all their money on a flush draw, not because they want to gamble, but because they think it’s the best play. In Martin’s life, this "gamble" meant taking measures to pursue his dream of becoming a rock star. It’s not reckless. It’s calculated.

“Poker teaches you how to think about risk in a different way,” Martin told me. “On paper it may not make sense what I’m doing, but I’m maximizing my EV (which stands for 'expected value,' a term commonly used by poker players to define the best possible situation) not by making shit loads of money playing poker, because what I’m pursuing is 'Life EV' (the best thing he can do for his life). That’s what makes me happy.”

“But what if you fail?” I asked. “I realized that I had been dealt aces in life to have such a continuous and constant passion, and not to pursue it would be akin to folding the aces preflop because I’m afraid of losing.” He threw it back at me. “If you can’t play your aces in life, then what is the point?”

Has he given up poker entirely? Not quite. “I still play 10 hours a week, but it’s different than before. It seems like the most ridiculous thing to say, but it has ended up being the ‘steady job.’” He imagines a hypothetical scenario with a wife and kids. “Let’s say we want to buy the house of our dreams. I can always go into a cave for six months and get that done. If I need money I can go and make it. If I don’t need money, I won’t work. It’s hard to have that as an artist, and I’m extremely lucky.”

Martin’s success has not come without sacrifice. It was after four in the morning when we spoke. “If I analyze my daily now it’s harder than it was before. I have a singing lesson in a few hours where I’m going to get berated by a Polish dude — who I’m paying nonetheless — because I should have slept more. Then I’ll go home and try to put in a hours of poker online. Afterwards it’s rehearsals, and the reason I’m up right now is I’m promoting a show. All of these are things which I’m not naturally good at…there’s no casualness to it. In poker, life was much easier. I would just get up every day and do what I want.”

He realizes that most people wouldn't understand his position. "It can be hard to justify after having a really big year in poker, to drastically reduce the amount I play to do something that generates no income. But this is my passion, it's what I'm into, it's what I love." He paused for effect. "I'm just following my dreams."

In the end, his dedication has paid off. “There’s one guy that comes solo to every concert I play just because he loves to watch us rock. To make someone feel that way…it’s an emotion that is incomparable to anything else. There’s nothing I can get out of poker as satisfying as that. Even bluffing someone out of a $100,000 pot doesn’t come close. This is as good as it gets.”

Martin’s story is just one of the many who exemplify the idea that taking risks is required for success. In his life it has been an acquired skill. Through years of playing poker, he has gained the courage to overcome fear, act with conviction and accomplish his dreams. “It’s funny,” he said to me before we said good night, "the biggest risk I took as a poker player is the decision not to play poker.”