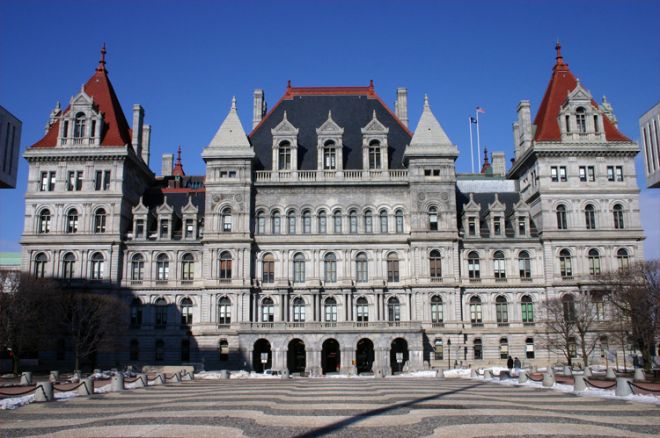 Online poker isn't expected to be included in New York State's final budget agreement, which will be voted on this weekend in advance of the April 1 start of the fiscal year.

The state senate made waves on March 11 by including the legalization of online poker in its initial version of the state budget.

The New York Daily News reported that a conceptual agreement between the legislative branch and Gov. Andrew Cuomo was reached Wednesday night.

If the full legislature agreed on including online poker in the state budget, and the governor signed off on it, New York would essentially be allocating expected funds to be gained from licensing the activity, which would then make it a priority for the legislature to pass an online poker bill or else need to find that money elsewhere.

Unfortunately, the budget inclusion does not have the needed support in the state assembly.

“I think what we've done is successfully lay groundwork for the introduction of online poker to be part of the larger casino debate that is going to happen in May,” said John Pappas, executive director of the Poker Players Alliance. “It's a meaningful accomplishment that we actually had the senate include the language as it did in the outset. We have a lot more work to do on the Assembly side. We plan to be heading up to Albany in the next couple months to get ready for the discussion in May.”

The mention of online poker in the state senate budget proposal was the first example of the impact made by New Jersey's legalization of online gambling last month. In less than two years, New York has gone from the state leading the charge to shut down the main online poker sites on Black Friday to openly discussing online poker regulation.

The first task at hand is to convince Assemblyman J. Gary Pretlow of the benefits of regulation. Pretlow, the chair of the State Assembly Racing and Wagering Committee, introduced a bill last month that would authorize brick-and-mortar gambling games such as poker, blackjack, craps, roulette and slot machines. However, Pretlow has expressed concerns about cheating and collusion in online poker.

“We're preparing to meet with him and explain how regulated Internet poker would work and how regulation would be far more effective to prevent collusion and sites operating in an unsavory manner,” Pappas said.

Pretlow's bill is the one that will be heard in May. Convincing Pretlow to amend the legislation to include online poker would be the simplest way to get the ball moving on legalization in New York.

If New York wants to procure money from gaming that can be used to address budgetary needs in the next couple years, the casino bill as constructed will not be the answer. It needs online poker.

“One of the things Internet poker has going for it in terms of revenue source is that the money can happen very quickly,” Pappas said. “Whereas, in the casino bill they are debating, the earliest scenario is to have revenue in 2016 because you have to construct the casinos, and there are likely to be legal delays with various lawsuits. With online poker, they can have money coming in right away through licenses.”