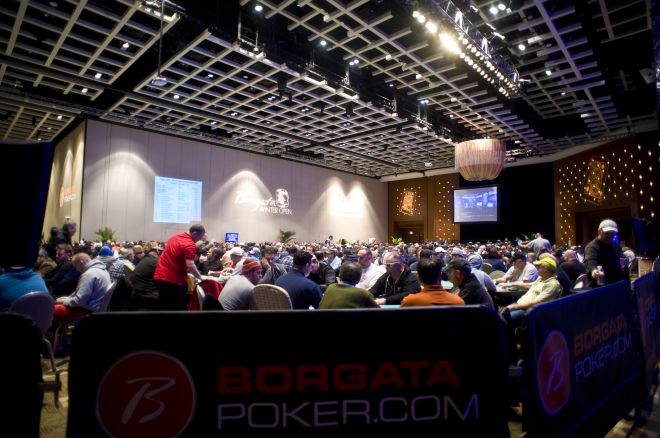 After more than 16 hours of play on the combined flights of Day 1b and Day 1c of the Borgata Winter Poker Open Event #1, Christian Lusardi emerged as the dominating chip stack as plays heads into Thursday's Day 2. Lusardi bagged 519,000 in chips to collect both the $2,000 prize for winning his flight and the notoriety of being the Day 1 chip leader. Lusardi, who has just over $30,000 in career cashes, figures to make considerably more than that if he can ride this stack to the final table.

With players split among different rooms and flights, tournament officials are still calculating the number of players and working on identifying some of the top stacks. Once that information becomes available, PokerNews will have it posted.

Among the players hot on Lusardi's heels is well-known actor and avid poker player James Woods, who finished Day 1b with 410,500. According to a player who witnessed Woods' ascent, the actor scooped up a four-way all-in pot early in the day, which he followed with a boat-over-boat situation to vault himself into contention for the chip lead. Other sizable stacks include Johnny Lam (355,000), Andre Nyffeler (327,000), Freddy Vaghefi (321,500), Joe Nelligan (318,000), and Luis Vazquez (315,500).

Early on, we found longtime circuit regular Nick Guagenti all in against Alynna Le after a flop of

Guagenti had top set, but he needed to dodge Le's straight draw. Le turned the tables with a

on the turn, and it was now Guagenti who needed to improve. The opposite happened, as a

"She can't lose a hand," said another player at the table.

Later, drama drew a crowd in the middle of the room.

East Coasters are typically known as a brash and boisterous bunch, prone to speaking loudly and punctuating their words with expressive body language. Today, that profile was spot on, as a dust up occurred between two players in which accusations and recriminations were flung across the felt like a fallen hand into the muck.

The drama began when four players took a flop after a three-bet, and when the

One player led out for a 3,000 bet, and the next player to act moved all in for his last 4,625. A third player flatted, and the fourth folded. The action returned to the original bettor, and that's where the screaming match started.

Apparently, the man who bet 3,000 uttered the word call, but then quickly retracted his statement and tried to raise the pot. He believed that the all-in bet of 4,625 constituted a raise, which would allow him to reraise, but the player with all of his chips in the middle adamantly objected.

"You said call! You said it — Call! That's what you said!" the player bellowed, his protestations echoing throughout the tournament area and attracting onlookers, tournament officials and reporters to see what the ruckus was about.

His body shaking with rage, the all-in player continued to argue his case, and as he become increasingly flustered the floorman threatened to assess a 10-hand penalty.

Finally, it was determined that the all-in bet did not constitute a raise which would allow for a reraise, and the dealer was instructed to burn and turn fourth street.

on board, and after a check to him, the man who wanted to reraise on the flop shoved his chips forward with a flourish. The move pushed the third player out of the hand, and after a

arrived on the river, the all-in player stared silently ahead, unwilling to show his hand.

was quickly tabled by his opponent, and after drawing the attention of the entire room with his shouting, the young East Coaster stormed away from the table, his tournament over.

Hwang, who took down last year's Borgata Winter Poker Open, fired a few more bullets on Wednesday, but ran into more than one roadblock.

Meanwhile, Men Nguyen was running into trouble of his own. On one hand, Nguyen opened to 3,200 under the gun, and Luis Urioste bumped it to 13,900 from middle position. Everyone folded back to Nguyen, who made the call. The flop came

, and both players checked. Nguyen checked again when the

fell on the turn, and Urioste checked behind. Nguyen had finally had enough of checking when the

arrived on the river, and he bet 15,000. Urioste called immediately, and Nguyen showed the

for aces up. Urioste had Nguyen's kicker beat with the

, and he took the sizable pot down. Nguyen ended the flight with a solid stack of 201,000.

Nyffeler, who bagged a room-leading stack to end Day 1c, was near extinction early in the day. However, he managed to parlay his final 2,100 into over 300,000 in part due to hands like this one.

Players will reconvene Thursday at noon to combine the survivors of the Day 1 flights and are scheduled to play down to 18 players. Be sure to check back with PokerNews for all pertinent updates.