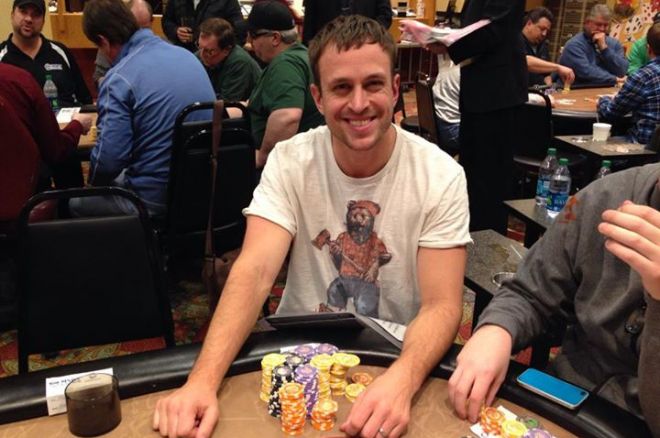 On Friday, Season 5 of the Mid-States Poker Tour (MSPT) kicked off at Running Aces Harness Club just outside the Twin Cities in Minnesota. The first of two starting flights in the $1,100 Main Event attracted 128 players, but after nine levels of play just 36 remained with Dustin Dirksen and his massive stack of 254,800 leading the way.

Both the Day 1a survivors and those who busted can return for Day 1b on Saturday, though survivors must forfeit their Day 1a stacks to do so. The fields will then combine for the final day on Sunday.

Dirksen owes a solid chunk of his massive stack to a big hand he won against Brett Kuznia late in the evening. It happened in Level 9 (800/1,600/200) when Kuznia three-bet to approximately 13,000 after an early-position raise from Dirksen. When action folded back to Dirksen, he shoved all in. Kuznia called, though he didn't seem thrilled about it.

"Classic," Dirksen said. This time, it was Kuznia on the wrong end of the flip when the board ran out

. Just like that Kuznia, who had fired two bullets on Day 1a after busting early on, was sent to the rail a second time while Dirksen vaulted to the chip lead.

Dirksen, who sports a résumé that includes three World Series of Poker final tables, a PokerStars Caribbean Adventure final table, and more than $1.1 million in live tournament cashes, is certainly a player whom not many runners will be happy to see with a large stack.

MSPT Team Pros Matt Kirby (104,500) and Blake Bohn (75,600) also bagged solid stacks. In Bohn's case, a lucky turn enabled him to avoid busting when he semi-bluffed all in and got there against a made hand.

A larger turnout is expected for Saturday's Day 1b, which will kick off at 5 p.m. local time. Be sure to tune back to PokerNews then as we bring you all of the live updates from the first stop on this year's MSPT.