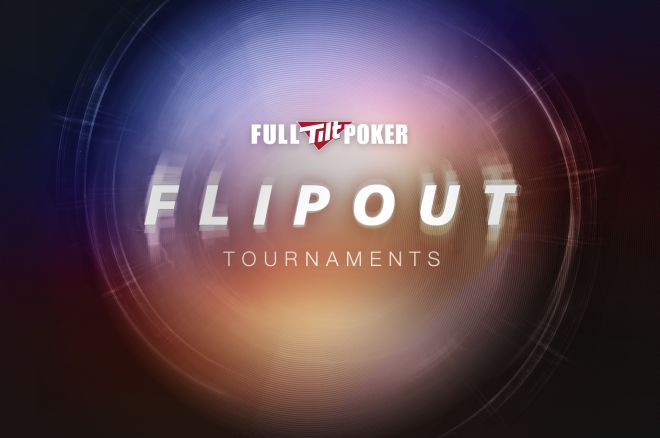 Full Tilt Poker is constantly developing new ways to keep online poker fun and exciting, and tomorrow the site will be launching a new, innovative form of poker tournaments that is sure to attract many players to action.

On Wednesday, March 19, Flipout Tournaments will be introduced on the Full Tilt Poker client. These are tournaments that allow players to flip straight away to get the action started and send everyone that wins right into the money. That's right, no more acting like a short-stack ninja on the money bubble or enduring countless hours of the most pressure-filled point of a poker tournament. But how do they work?

During the first round of a Flipout Tournament, all players automatically go all in to determine a winner. From there, the remaining players — the survivors — are reseated in regular multi-table tournament format and the event continues with a standard betting structure. The catch is that all of the players that win the flip in the first round are now in the money.

"The time saving of a Flipout is obvious, but a bit less obvious is what happens after the flip round. You’ll be in the money of a potentially large tournament and nobody has actually played a hand yet," Sarne Lightman, Full Tilt Poker’s Head of Marketing, told PokerNews. "This means the average skill level when you hit the money will be the same as the average skill level at the start of the tournament, which is very different from a standard tournament."

This new format of online poker tournament will be fully available to play on Wednesday, and Full Tilt Poker is excited to see the kick off of these events. "We’ll have 81-player sit-n-gos where, if you make it past the flip round, you’ll be in the money and at the nine-handed final table immediately," Lightman added. "This will be great for players who want more final-table experience playing for bigger money (with the extra excitement and pressure that brings) than if they just played a nine-handed sit-n-go."

What more could you ask for after signing up for a multi-table tournament, playing one very quick round of poker, and ending up in the money with a big top prize up for grabs? Well, you could lose the flip, but Lightman's got a little tip to help you out.

"The only real downside to Flipouts that I can think of is how often you won’t make it past the flip round," Lightman said. "If I was playing these (and I’m sad I can’t), I’d probably drop down a couple of stake levels and just play a bunch of them until I made it through."

In celebration of the launch of Flipout Tournaments, Full Tilt Poker will be hosting a four-day Flipout Festival that boasts $25,000 in added cash and prizes. The festival will begin on Friday, March 21 and consist of 108 tournaments across 12 events. Each of the 12 events features a range of buy-in levels beginning as little as a freeroll.