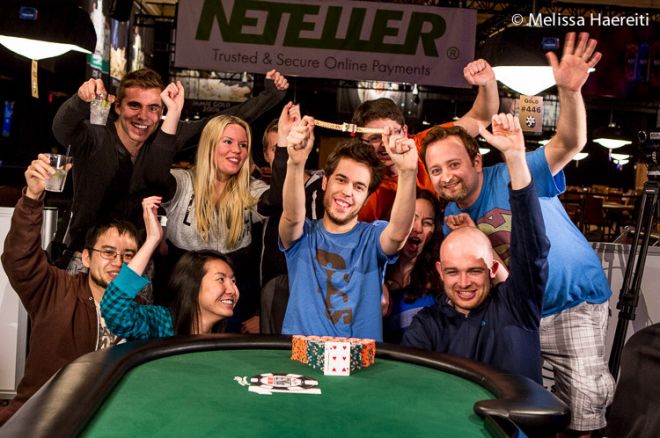 Three of the five events in action yesterday at the 2014 World Series of Poker played down to conclusions - all three filled with excitement - with Dominik Nitsche, Christopher Wallace, and Doug Polk becoming the latest bracelet winners. Nitsche’s victory grabbed top billing for the day, as it marked the young German’s third career bracelet (and second) in less than a month. Here's a recap of Tuesday’s drama-packed day of poker.

Yesterday, sixteen players returned from a starting field of 2,043 in Event #21: $1,000 No-Limit Hold’em, with 2011 November Niner Badih “Bob” Bounahra leading the counts and Nitsche lurking conspicuously in third position. It was less than three weeks ago that Nitsche had earned the first bracelet of the summer after winning the 2014 WSOP National Championship in Atlantic City, his second after having won a previous $1,000 NLHE event at the 2012 WSOP where he prevailed over 4,620 entrants.

The group whittled down to an official final table of nine with Mickey Petersen (14th, $15,334), Dan Alspach (13th, $15,334), and Erwann Pecheux (11th, $19,398) among the day’s early eliminations, then eventually worked their way to the final three players following the knockouts of Jeff Gross (sixth), Thayer “THAY3R” Rasmussen (fifth), and Zachary Gruneberg (fourth).

Bounahra then finally saw his Event #21 run end with a third-place finish in a three-way all-in hand where Bounahra took a pair of sevens up against Nitsche’s tens and D’Alesandro’s queens. The best pocket pair prevailed, and D’Alesandro carried a nearly 2.5-to-1 chip lead to heads-up play.

It would take just over 60 hands for Nitsche to draw even, but not after enjoying several double-ups including an especially fortunate one in which the German had

, then watched the board come

with the river ten saving Nitsche.

About 30 hands after Nitsche had pulled ahead, then on Hand #292 of the final table had D’Alesandro all in and at risk with

to give Nitsche two pair to D’Alesandro’s one, and after the turn and river both brought aces, Nitsche had won.

At just 23, Nitsche becomes the youngest-ever player to win a third career WSOP bracelet, beating Phil Ivey’s previous mark of 26 when he won his third in 2002 (Ivey would win a fourth bracelet that summer, too). Read more about his win in “Rapid Reaction: Dominik Nitsche Shatters Phil Ivey’s WSOP Bracelet Record.”

The last bracelet to be won early Wednesday morning came in the Event #22: $10,000 H.O.R.S.E. Championship. Christopher Wallace of St. Paul, Minnesota earned his first career WSOP bracelet after outlasting a tough group of Day 3 competitors, more than half of whom - 11 of the 21 survivors from the 200-entrant starting field - had won bracelets before.

By the time the official eight-handed final table began, Richard Sklar had moved all of the way up into the chip lead. Sklar would last until three-handed play before falling in an Omaha hi-low hand to yet another bracelet holder, Randy Ohel, who would then take a small chip lead into heads-up play versus Wallace.

Wallace would then seize the lead during a razz round, extend it during stud, and finally finish Ohel off in a stud hi-low hand after drawing out a full house to beat Ohel’s trip aces.

In stark contrast to the long, drawn-out day of play in Event #22, the second and final day of Event #23: $1,000 Turbo No-Limit Hold’em zipped by lightning quick with high-stakes online player and Las Vegas resident Doug “WCGRider” Polk successfully negotiating his way to victory through the final table’s many all-ins.

The final nine were all that was left of a starting field of 1,472 that had raced through half-hour levels on Tuesday, then slowed down only a little to play 40-minute levels yesterday. Three players fell within the first dozen hands, followed by
Tony Gregg in sixth. Polk next ousted both Liam Alcock (fifth) and Chad Cox (fourth), then watched Andy Philachack knock out Jonathan Hanner in third to set up heads-up play.

Polk had a slight advantage to start the final duel and would swiftly chip up to widen the gap before knocking out Philachack on the 19th hand between the pair.

The final hand was not a preflop all-in confrontation, but rather saw the players match bets to the river as the board came

for trip treys, but Polk had

for a winning straight.

Of that starting group there were 129 players left to bag chips at night’s end on Tuesday with Chris “Big Huni” Hunichen having collected the most thus far. Bryn Kenney, Freddy Deeb, Kevin Saul, Calvin Anderson, and Greg Merson all found themselves spots inside the Top 10 at the end of Day 1. In addition to winning the Main Event in 2012, Merson won the $10K six-handed NLHE event that year.

There were 139 players still in the hunt when play concluded for Day 1 in Event #25, with Cameron Tahmasebi leading the way and Tom Schneider sitting inside the top five. Schneider won the first of his four career WSOP bracelets in this same event in 2007.

After yesterday’s long and busy schedule, Wednesday finds just three events in action and no bracelets due to be won. Events #24 and #25 proceed into their respective Day 2s, while Event #26: $1,500 No-Limit Hold’em is the only new event set to begin.

Here’s the full schedule for Wednesday (all times PST):

Video of the Day

Remko Rinkema spoke with Nitsche following his big win in Event #21 about the final table and what it means to win a third WSOP bracelet in such a short span of time: