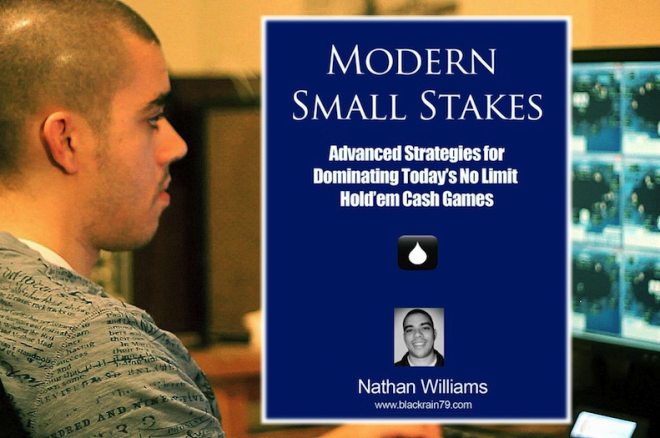 Nathan “BlackRain79” Williams is back with a follow-up to his highly regarded debut strategy book Crushing the Microstakes, this time moving up in stakes to give readers advice about Modern Small Stakes: Advanced Strategies for Dominating Today’s No-Limit Hold’em Cash Games. As with his previous book, Williams’s new title offers readers comprehensive, well-considered advice about how best to approach lower-stakes no-limit hold’em.

Originally from Canada, Williams started out a decade ago playing the play money games online, eventually starting a small bankroll after managing to sell some play money chips. From there Williams spent several years playing microstakes where he became one of the biggest winners at those limits, earning enough to quit his full-time job and eventually earn a reputation as the unofficial king of the micros.

In late 2011 Williams compiled what he’d learned from the millions of hands he’d played at those lowest of limits in his book Crushing the Microstakes. The work represented a unique contribution to poker strategy insofar as it focused solely on the lowest stakes no-limit hold’em games online (NL2, NL4, and NL5), with a great deal of concrete advice about the types of players and styles one encounters at those limits.

While it might seem as though such a book would address only a narrow range of players, the fact is nearly everyone who plays online starts with the “micros,” and many who stick with game are content to remain there. Thus it wasn’t surprising to see Crushing the Microstakes be so well received given the wealth of smartly-presented and useful strategic teaching it delivers.

In the introduction to Modern Small Stakes, Williams characterizes his first book as “basically a set of training wheels for beginners and people struggling at the lowest limits.” Meanwhile, with MSS Williams is “taking the training wheels off” to move beyond fundamentals needed to achieve handsome win rates at the micros to discuss more advanced strategies needed in today’s NL10, NL25, NL50, and NL100 online games.

The key difference — one that guides all of the advice in MSS — is that the highly exploitative and essentially unbalanced strategies Williams recommends to those looking to win at microstakes aren’t as effective when moving up in limits and facing a higher percentage of thinking, savvy players. Thus a lot of Williams’s focus concerns learning how to balance one’s play in order to succeed against opponents who are more consciously focused upon and reacting to the meaning behind others’ actions.

In other words, while Crushing the Microstakes offers a lot of practical tips spelling out effective approaches to commonly-faced situations, Modern Small Stakes focuses more on how to think about why some lines work better than others, as well as the need to adapt and respond when decisions become more complex. As Williams puts it, there are fewer “‘if A, then do B’ type explanations” and more attention given to trying “to understand the reasons behind the plays that you are making.”

The book is lengthy (exactly 500 pages), but well organized with the first third devoted to discussing useful concepts and the rest covering strategies for handling dozens of different hold’em decisions with more than 100 sample hands used to illustrate the advice given.

Along with some general pointers about win rates, volume, bankroll management, setting up a HUD (Heads-Up Display), and game and table selection, a lot of that first third of the book focuses on profiling and categorizing opponents one is likely to encounter in the NL10, NL25, NL50, and NL100 games. Such an emphasis early on helps underscore a key distinction between the micros and small stakes games, since (as Williams showed in CMS) there is much less variety among the players at NL2, NL4, and NL5.

Williams explains different player types that populate the small stakes games, dividing them first into regulars and recreational players, then further breaking down those categories into “bad regs” (the “nits” and “super nits,” and “TAGfish” players), “good regs” (all aggressive, with varying degrees of tightness and looseness), and the “whales,” “maniacs,” and “semi-loose passive” players who stand out as desirable opponents to seek out at these limits.

These discussions are helpful in several ways, and in fact do include some concrete “how to”-type pointers for attacking specific player types once they have been identified (e.g., try to isolate the “semi-loose passive” recreational player; value bet them more and bluff them less; etc.). They also can help readers identify their own tendencies and how they might be categorized by thinking opponents.

From there Williams moves into discussing starting hand selection and ranges for open-raising from all positions (both full ring and 6-max.), as well as hand selection and ranges for proceeding in pots that have been raised already (covering folding, flatting, and three-betting, again in either full-ring or 6-max. games). PokerStove screenshots help illustrate at a glance the ranges Williams recommends, with further commentary helping explain the reasoning behind his suggestions.

The hand examples begin at this point, all of which have been taken from actual hands Williams has played online. Each is accompanied by HUD stats on Wiliams’s opponent, and thus dually serve as tips for how to approach particular situations (position, hand strength, board texture, etc.) as well as how to read and apply knowledge gleaned from the HUD with number of hands played, VPIP (Voluntarily Put Money In Pot %), PFR (Preflop Raise %), and AF (aggression factor) foregrounded.

Hand examples are presented under various categories, showing lines considered based on a variety of circumstances including how preflop action affects thinking on each of the postflop street. For instance, under the section “Strategy on the River as the Preflop Raiser,” Williams presents five different hands (both short-handed and full ring), with each example presenting increasingly complex scenarios to consider.

The first finds an early position player limping, the hero raising on the button with

, and his opponent calling. The flop comes ace-high, the villain check-calls bets on both the flop and turn, then checks the river. Williams considers the villain’s HUD stats (indicating he’s something of a calling station) and board texture, then recommends a river value bet.

and then barrels through both the flop and turn as more overcards arrive. The villain calls him down, and when an ace falls on the river the hero is caught between shutting down or firing a third bet following a good river scare card. Williams patiently examines all of the factors once again before making his recommendation (to fire again).

Here’s a summary of most (not all) of the categories into which Williams’s hand examples fall, each of which he breaks down further into subcategories according to various situational specifics (e.g., three-bet pots, getting donk-bet into, having one’s c-bet raised, single vs. multiple opponents, and more):

As I say, this isn’t even a complete summary of Williams’s categories, which means that for any situation or hand-type for which the reader might be looking for guidance, there’s likely an example.

In fact, one way of using the book could be to bring it out as part of a player’s post-session review. Having identified certain hands that presented special problems — say, a couple in which a three-bet pot had reached the river where a tough decision had to be made — the reader could then consult Williams’s discussion of that very situation and consider how his recommendations would apply.

Speaking of studying the game, Williams ends the book with some tips about how to conduct such session reviews, as well as further pointers about managing one’s own tilt and taking advantage of opponents’ tilt.

As demonstrated before in Crushing the Microstakes, Williams writes in an accessible style that employs jargon where necessary but is always readable and easy to follow. His advice is clearly delivered as well, with the authority behind every recommendation strengthened by his attention to detail. Also refreshing is the realistically modest approach Williams adopts, beginning with his introductory disclaimer that small stakes games can be quite challenging — especially when compared to the micros — with players’ win rates often dropping and the variance frequently increasing, too.

In all, Modern Small Stakes represents a valuable addition to thinking about no-limit hold’em strategy, and should be of particular value both to recreational players looking for help dealing with tougher opponents and to more seasoned grinders who have made the move up to NL10 and above but need help broadening their strategic knowledge.

To pick up an electronic copy of the book, visit blackrain79.com or contact Williams at [email protected].