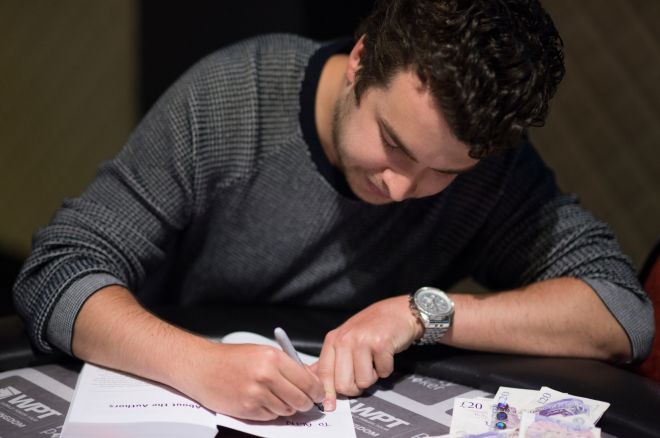 Nearly a year ago I received an exclusive from D&B Publishing regarding an upcoming book by Chris "Moorman1" Moorman, who had the distinction of being the first player to win more than $10 million playing online tournaments. Poker strategy books hit the market often, but those authored by someone of Moorman's caliber are increasingly rare. It was immediately apparent the poker world was in for a treat.

“Any publisher would be delighted to publish a book by Chris Moorman. He is such an incredibly successful player online and live, and his results speak for themselves,” D&B publisher Dan Addelman told PokerNews at the time. “To be able to pass on some of the knowledge he's accumulated over the years will undoubtedly make the book a bestseller.”

I had the chance to speak with Moorman before he began writing the book, and he revealed it was something he wanted pour his "heart and soul into it" while delivering a text that would inspire, something akin to Harrington on Hold'em. So was he able to meet his lofty aspirations?

Moorman's Book of Poker, which hit the market late last year, takes a straightforward approach in which he analyzes 80 online tournament hand histories that were played by co-author Byron Jacobs, who you could call your run-of-the-mill mid-stakes grinder. Each hand falls under a specific tournament (i.e. PokerStars Supernova, Turbo 6-Max, Full Tilt "Rush," Turbo Full Table, 6-Max SNG Hyper-Turbo, and Random Hands), and addresses a vast array of topics including:

In turn, each hand analysis is constructed in similar fashion. First, the hand is presented as a graphic with all pertinent information, including a narrative by Jacobs on how he played the hand and why. From there, Moorman comes in with an analysis of Jacobs' play, offering praise and criticism as he sees fit. Finally, Jacobs jumps back in with a short conclusion in which he basically sums up Moorman's main points.

Upon first glance I was worried Moorman's Book of Poker wouldn't apply to me, after all I live in the United States and am unable to play online poker. Despite examining only online hand histories, I was pleased to discover the vast majority of concepts discussed were applicable across the poker spectrum. In fact, one hand in particular had an immediate impact on my live game.

After reading Hand #7: Planning the River on the Turn, I made a little note right in the book's margin. "I may be giving too much credit to players who don't raise preflop," I wrote after taking Moorman's analysis to heart. The next day, I played a nightly tournament at my local casino and resolved to be fearless against preflop limpers. I won't go into detail, but suffice it to say I was impressed with the results. I actually wrote about it for my nationally-syndicated poker column, so keep an eye out for that in newspapers across the country.

Even though the material placated me, I must admit I wasn't a fan of the coaching format – at least not at first. Over the years I've become accustomed to reading poker books in which the author describes a hand with a suggestion as to what to do and why. Easy right? Well Moorman's Book of Poker proved a little more challenging in that you not only have to immerse yourself in the conversation between Jacobs and Moorman, but also put yourself in the former's shoes. You have to pretend you would have played the hand the same way. I wasn't a big fan for the first dozen hands or so, but then I began to realize the power of the coaching format.

Instead of Moorman offering his own hands, which would likely be from bigger buy-in tournaments and on a top tier level of thinking, Jacobs had the chance to throw an assortment of unique mid-stakes poker situations and get feedback. Obviously you wouldn't have played every hand like Jacobs, but in those instances you're presented with another learning opportunity. Imagine having the ability to run any hand by a poker pro and get their feedback. That's poker coaching in a nutshell, but hiring a coach can cost a fortune. Here, for the modest $34.95 cover price, you get a similar experience, though you have to live vicariously through Jacobs.

Doing so proved a surprisingly effective, and I must say I learned a lot from the book, which in turn made me a converted fan of the coaching format. Simply put, Moorman's Book of Poker is in the top tier of poker strategy books I've read in the past decade. It truly exemplifies the thought processes one must cultivate in order to advance to the highest levels of the game.

To give you a better idea of what Moorman's Book of Poker offers, I was fortunate enough to enlist Moorman's help. In last week's Hold'em with Holloway, my weekly strategy column here on PokerNews, I highlighted a hand from a $60 buy-in nightly tournament, one that presented me with multiple decision points. Check that piece out by clicking here.

This week, Moorman was kind enough to offer an analysis on the hand, much like he does for Jacobs throughout the book. Between my initial article and Moorman's analysis, we've essentially constructed a hand akin to the 80 featured in Moorman's Book of Poker, though mine is from the live realm. Regardless, it provides you a good glimpse of what you can expect from the text.

I highly recommend Moorman's Book of Poker for any low- to mid-stakes poker players looking to improve their game. It's especially applicable to tournament players, but plenty of the "thought process" concepts will translate well to cash games. Click here to pick up your copy through PokerNews Books Section.