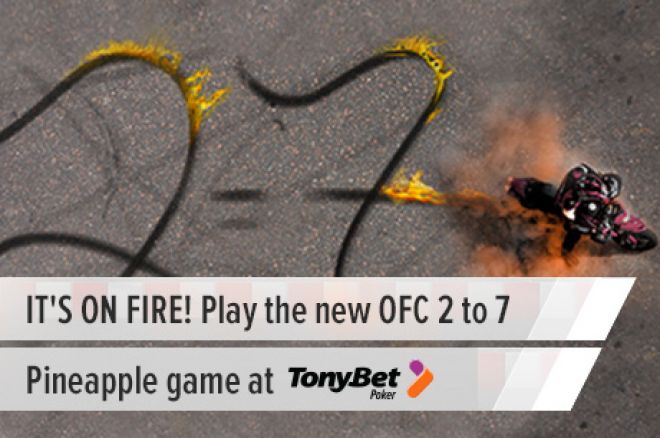 The new OFC game is a variant of the uber-popular 'pineapple,' in which players are requested to play their middle hand in Kansas City lowball mode. Contrary to how it happens in the 'regular' OFC poker games, the players need to set the lowest possible hand in the middle in order to avoid a fault.

"It’s actually very exciting," a Tonybet Poker representative told PokerNews. "The game is fun, intriguing and unpredictable. It’s very different from the regular Pineapple: when you play it, you need to turn some switches in your head and adapt it to a different game mode."

2-7 Pineapple OFC Poker games are already available at TonyBet Poker with limits that start from as low as €0.02 per point and go all the way up to €25/point. Currently, the game is available both at the three handed and at the heads-up cash game tables.

The launch of the 2-7 pineapple OFC poker games is not the only surprise that TonyBet has planned for 2015, as one of the room’s representatives explained that new games will soon be added to the platform.

"This is why both we and our players love Open Face Chinese," the room’s representative concluded. "The game is very different from all the other poker games, and the best thing is that you can juggle with it by adding new features and inventing new variations. It feels like the game is alive and constantly evolving into something absolutely new and even more exciting."

"I play Open Face poker all the time – waiting for a train, waiting for the plane, in bed, all the time," Shahade explained. "Right now it’s gaining popularity throughout the poker community, but I think that to keep the pace it needs to keep evolving by introducing new variants and new formats."

"Jennifer was absolutely right," a representative from TonyBet commented. "The whole concept of OFC is screaming for new features and innovations, and we’re ready to take on the challenge."

"Pineapple deuce-to-seven is very fun to play and although it’s still new, it already has its own fan base," he continued. "However, this is just the beginning. We’re going to introduce even more new games in the near future providing our players only with the best online OFC experience."