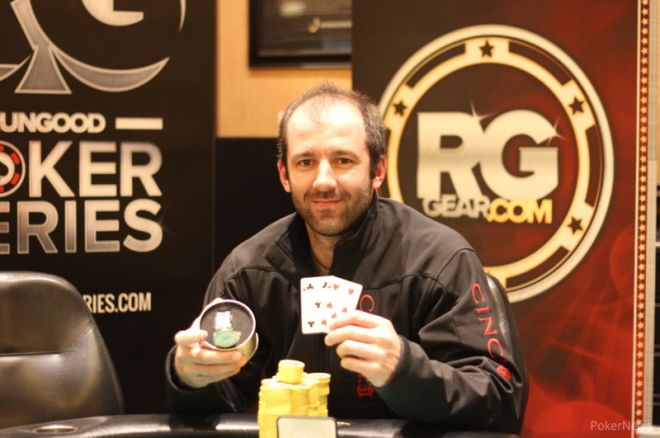 The RunGood Poker Series Horseshoe Casino Council Bluffs $675 Main Event proved to be a tremendous success. The 426 entries not only crushed the $100,000 guarantee by creating a prize pool of $251,340, it also became the largest event in the tour's young history. The winner was supposed to take home $57,806 and a $10,000 World Series of Poker Main Event seat, but that's not how things played out.

Instead, a deal was struck amongst the final three players, each of whom locked up $39,083 and played it out for the seat. By the time the last river card fell, it was Henry Gingerich who claimed the title of champion. It was not unfamiliar turf for the Iowan as last April he won a World Series of Poker Circuit ring at this very venue.

Gingerich (pictured) recently relocated to the southern part of the state and has cut back on playing poker – partly because of his job as a salesman, but more so to spend time with his 14-month-old son. That said, he still finds time to play cash and the occasional tournament, which most of the time he feels are "frustrating." Obviously this wasn't one of those tournaments.

"It feels good to come into a field like this and succeed. To hang and compete with the pro, it was an awesome event," said Gingerich, who said he may use some of the money to get his wife an SUV.

When play resumed at Noon local time, 28 players needed to fall before the money was reached. Among those to leave empty handed were Tom Wessling, Joe Thornton, Travis Northrope, Bob Slezak, Jonathan Gaviao, and Brian Turner.

Turner actually finished in 46th place as the bubble boy, a result of him getting his short stack all in from the cutoff with the

and receiving a call from the start-of-the-day chip leader Adrian Jimenez, who looked him up with the

. A four on the flop gave Jimenez the lead, and he held on to it through the river. Jimenez would go on to fall in 24th place for $2,011.

The rest of the final table was one of constantly shifting dynamics. Multiple players held the chip lead, but bad beats and suck outs made anything possible. For example, with seven players left action folded to Robbie Kent in the cutoff and he moved all in for 440,000. Jeff Fielder then called from the button, and when action reached Paul Ewen in the big he moved all in over the top for 490,000. Fielder seemed disgusted knowing full well Ewen woke up with a big one, but it was only 50,000 more for him to call, which he did.

Indeed, Ewen woke up with pocket rockets, which dominated Kent and had Fielder in a bad spot. That all changed when the flop came out

"Oh wow," Fielder said quietly as the railbird reacted to the sudden turn of events. Both Ewen and Kent watched helplessly as neither the

river paired their hand. The stacks were broken down to verify that Ewen had more than Kent, which he did. That meant Kent became the seventh-place finisher and Ewen the sixth.

Fielder wound up being the next to go, which set up a length three-handed affair between Cary Long, Calvin Musil, and Gingerich. After nearly two hours of play, the deal was made, and another hour after that, Long fell in third and Gingerich finished of Musil by turning a straight.

The RunGood Poker Series will now travel to the Hard Rock Tulsa Casino from April 22-26. For more details, visit rungoodpokerseries.com.