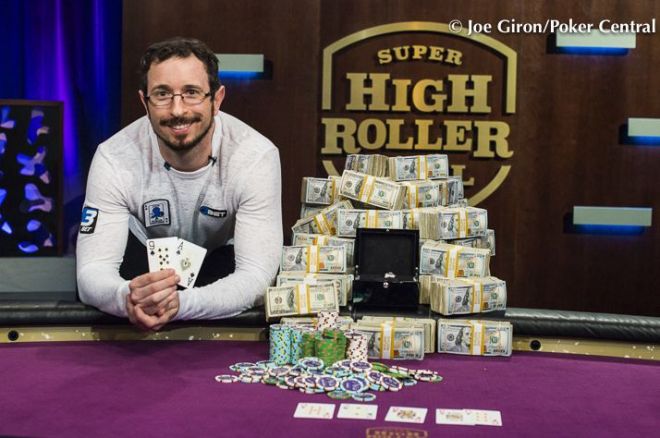 The inaugural $500,000 Super High Roller Bowl started with 43 entrants, but on Sunday just seven players, who had each locked up a part of the $21.5 million prize pool, returned to battle down to a winner. It took the better part of 10 hours, but in the end it was Brian Rast who walked away with the $7.525 million first-place prize and championship ring.

In doing so, Rast, who was recently the subject of a PokerNews feature story, notched the fourth seven-figure score of his career.

His first came in 2011 when he won the World Series of Poker $50,000 Poker Players' Championship for over $1.7 million, and then a year later he took sixth in the inaugural Big One for ONE DROP for over $1.6 million. More recently, he took home just under $1.1 million for winning the World Poker Tour Doyle Brunson Five Diamond World Poker Classic High Roller in December 2013. This score, though, was his biggest by a large margin, and it vaulted him into 11th place on poker's all-time money list.

, giving Seidel the lead with aces and queens. However, the

turn fell to give Seiver a set of sevens. The river was the

, no help to Seidel, ending his tournament in seventh place for $860,000. That score moved Seidel over $25 million in career live tournament earnings and over $4.5 million in earnings in 2015 alone.

Tom Marchese was the next to go. First he was crippled after running big slick into the pocket kings of Timofey "Trueteller" Kuznetsov, and on the very next hand got it in with the

of David Peters. The board ran out

, and that was all she wrote for Marchese.

Marchese earned $1.075 million for his finish, and with that he increased his live tournament earnings to over $11.1 million.

Not long after, the cards turned against Peters and he watched his chips dispersed around the table. Eventually he shoved his last 1.255 million holding the

of Connor Drinan. The board ran out

and Peters took his leave in fifth place.

Peters, who came into this event with nearly $5.3 million in career live tournament earnings, won $1.505 million and has now won just under $6.8 million in his career on the live felt. The score also pushed Peters' year to his best ever, as he's now earned over $2.36 million in 2015. At the beginning of the year, Peters was the subject of one of Rich Ryan's 10 Poker Predictions for 2015. In his No. 3 prediction, Ryan wrote that Peters would cash for at least $1.5 million in 2015. Thanks to this result, that prediction has come true.

After the dinner break, Kuznetsov hit the rail when he flopped top pair, but ran into Seiver's set of nines, and then three-handed play stretched on until pocket eights wreaked havoc twice within five hands. The first saw Seiver use them to crack Rast's kings and double, and then Rast found them to crack queens and send Drinan to the rail in third place.

Drinan earned $3.225 million, and that doubled his career live tournament earnings to over $6.5 million.

flop gave Rast the lead, and he held onto it as the

blanked on the turn followed by the