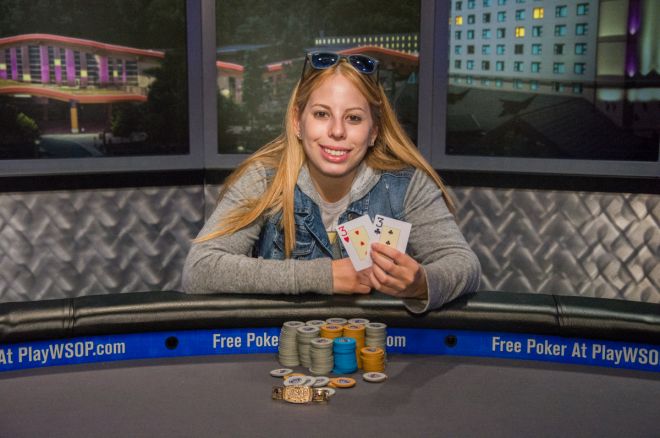 On Friday, the fifth annual World Series of Poker National Championship concluded at Harrah's Cherokee. The event attracted a field of 122 players — a mix of $10,000 buy-in at-large qualifiers and those who earned their way in via the WSOP Circuit — and created a $1.22 million prize pool.

In the end, Loni Harwood defeated the WSOP Circuit's most accomplished player, Alex Masek, in heads-up play to capture the title, the $341,599 first-place prize, and her second WSOP gold bracelet.

In 2013, the two-time Circuit ring winner had a career year at the WSOP. She cashed six times for $874,698, made three final tables, and won a bracelet in a $1,500 no-limit hold'em event. In 2014, she missed WSOP action so she could be near her ailing mother, who ultimately passed away.

Appropriately, Harwood dedicated the win to her mother with the hashtag #ForMom, and was also quick to thank a specific member of her family.

"I wanna shout out to my brother, Scott Harwood," Harwood said after her win. "He's one of my best friends. He's always there for me. He wanted to be here today, but he works and he couldn't get the day off. He's been on the virtual rail and I'm sure he's waiting for a phone call right now."

Among those to take a shot in the event were Phil Hellmuth, Jeff Madsen, John Monnette, Scott Clements, and defending champ Dominik Nitsche. The German was actually the only player in that group to make the money, finishing in 15th place for $20,594.

Here are the full results from the 2015 WSOP National Championship:

According to updates from the event, Harwood began the third and final day with a hefty chip lead among the final seven; in fact, she had more than double her closest competitor. She got off to a hot start too when she eliminated Paul Mattioda on Hand #47 of the final table.

It happened when a short-stacked Mattioda, who qualified by finishing 19th in points on the National Championship leaderboard, shoved all in for 99,000 from the small blind and Harwood called from the big.

, and that was all she wrote for Mattioda, who took home $49,203 for his seventh-place finish.

It was a flip, and all Negreanu had to do was hold to double. Things looked good on the

turn didn't appear harmful; however, that proved inaccurate as it was followed by the

on the river. Negreanu tripped up, but it was no good as Masek rivered Broadway. Negreanu, who along with Harwood was the only finalist to have bought in for $10,000, had to settle for sixth place and $63,647 in prize money.

Masek, who began the day as the short stack, managed to build his stack and actually took the chip lead into heads-up play against Harwood, albeit a slim one. Within a few hands Harwood would seize the lead before setting about whittling down her opponent. In what would be the final hand of the tournament, which happened in Level 25 (20,000/40,000/5,000) on Hand #156 of the final table, Harwood moved all in from the button and Masek called off his last 650,000 or so.

It was a flip, but not after the flop came down

to give Harwood a set. The

turn made things interesting as Masek, a record eight-time WSOP Circuit ring winner, picked up a flush draw, but it failed to materialize as the

"He was definitely the opponent I didn’t want to get heads up with," Harwood complimented her opponent after the conclusion of play.

A look at all the WSOP National Championship winners:

The 2015 WSOP National Championship was filmed by ESPN and will be broadcast beginning on August 18. The 2015/2016 WSOP Circuit season is set to begin next week, with the first event being held at Foxwoods Resort Casino in Connecticut on August 6th. For more information, click here.