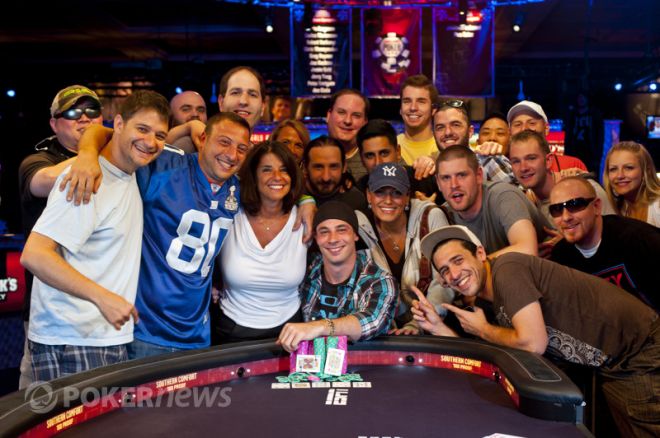 It was another hectic day at the Rio as Day 2c of the 2012 World Series of Poker Main Event played out Wednesday alongside the televised final table of the WSOP National Championship final table. In the WSOP National Championship, Ryan Eriquezzo was able to outlast the other seven players and take home the bracelet and title. On Day 2c of the Main Event, Michael Hack was able to build up the biggest stack of the day, raking in 457,000, just behind the Day 2a/2b chip leader Gaelle Baumann, who bagged up 505,800. Bauman, Hack and nearly 1,760 other players will return Thursday to play Day 3 of the 2012 World Series of Poker Main Event.

The final eight players of the WSOP National Championship returned Wednesday to play down to a winner for ESPN cameras and fans. There were plenty of circuit grinders and notable players alike as some earned a freeroll into the event by winning a Main Event at a WSOP circuit stop or earning enough Player of the Year points on the Circuit, and some players who were on top of the Player of the Year list for the World Series of Poker over the last two years bought in for $10,000 directly. Among those at the final table were Sam Stein, David “ODB” Baker, Amanda Musumeci and Huy Nguyen. At the end of the day though, Ryan Eriquezzo emerged victorious, earning the title of World Series of Poker National Champion.

The day began quickly as Musumeci found herself crippled at the hands of Huy Nguyen who flopped two pair against Musumeci's turned two pair and a flush draw. After that, Musumeci was extremely short-stacked and found herself looking for a good spot to get her chips in the middle. On her final hand, she moved all in over Baker's opening raise with

, and Musumeci exited the ESPN Main Stage in eighth place.

Next to go was Sam Stein, who found himself all-in with

was no help to Stein, who made his way to the exit as the second elimination of the day.

David "ODB" Baker was the next to go when he got all of his chips in against Huy Nguyen. Baked moved all in from under the gun and was called by Nguyen in the hijack seat. The rest of the players folded, and Baker showed

for over cards against Nguyen's

. After the flop fell,

, Baker needed running clubs or straight cards to stay alive. He got a little sweat when the

hit the turn. Unfortunately for Baker, the river was the

pairing him, but it wasn't enough for the double-up. He hit the rail in sixth place.

Start-of-the-day chip leader, Yung Hwang was the next to go. After finding himself short stacked, Hwang moved all-in preflop with

and was called by Stone's

. The flop was disaster for Hwang when it fell

giving him hope for only runner cards. The

on the turn was one of them, but the

on the river was not, and Hwang made his way out in fifth place.

After the players returned from the dinner break, Matt Keikoan was eliminated. In the hand, Stone made a raise under the gun, and Keikoan called from the button. The flop fell

on the turn. Stone checked again, but put in a check-raise to 600,000 after Keikoan bet 200,000. Keikoan thought briefly before moving all in, and Stone called. Keikoan was holding

for a flopped set, but Stone held the nuts with

. Keikoan would need the board to pair to stay alive, but it didn't when the

fell on the river, and he made his exit in fourth place.

Huy Nguyen left the main stage in third place. On Nguyen's final hand, Eriquezzo moved all in from the small blind, putting pressure on Nguyen, who quickly called for the remainder of his chips with

and needed to improve for the knockout, which he did on the

flop. The turn was the

offering no help to Nguyen, and the river was the

. Nguyen was eliminated in third place for $186,265, leaving Eriquezzo and Stone heads-up.

Stone began with the chip lead, but Eriquezzo earned an early double-up to put himself in the lead. It was a battle back and forth from there, but Eriquezzo was finally able to seal the deal. On the last hand, Stone moved all in from the button with

and was called by Eriquezzo who was holding

board, Stone picked up the lead. He held the lead through the

turn, but lost it, and fell in second when Eriquezzo made a straight with the

The final table of the World Series of Poker National Championship will air of ESPN on Aug. 7.

Until that begins, you can check out all of our coverage from the event starting on Day 1, by checking out our live reporting blog.

The 2,300 survivors from Day 1c returned Wednesday to see who would be making it to Day 3 and who would be going home empty handed. Plenty of players fell throughout the day and when the night came to a close, only 900 players remained. Several notables made it through the day including former 2010 November Niner Joseph Cheong and 2011 $25,000 Heads-Up Champion Jake Cody who finished the day as some of the chip leaders going into Day 3.

Two-time bracelet winner Andy Frankenberger was another player to hit the rail late in the day. On a

flop, Frankenberger bet out. When action got to former Main Event Champion Johnny Chan, he put in a raise, to which Frankenberger responded by moving all in. Chan called and turned up

, and Frankenberger was well ahead with

on the turn kept Frankenberger in the lead, but the

on the river sent Frankenberger home.

Frankenberger and Chan's table also included Team PokerStars Online's Randy Lew, as well as Lee Watkinson and Shannon Shorr. Lew suffered the same fate as Frankenberger and was eliminated by Chan. In his final hand, Lew made it 2,600 and several players made the call, before Chan made it 12,000 from the big blind. Lew took a moment before announcing he was all-in and only Chan made the call. Lew was holding

but Chan had him crushed with

There are plenty of notable players moving on to Day 3 such as Sam Holden, Joseph Cheong, Ronnie Bardah, Ben Lamb, Antonio Esfandiari, and Marcel Luske.

John Juanda built a healthy stack during Day 2c. In one hand, Juanda was heads-up on the flop with 10,000 in chips in the middle. The flop read

fall on the turn. Juanda checked, and his opponent bet 21,000 which he called again. On the

for a flopped set, and Juanda mucked. Even in spite of that hand, Juanda will move onto Day 3 with 159,000 chips.

Joseph Cheong was also making moves on Day 2c. We managed to catch Cheong scoop a big pot late in the day that helped propel him among the chip leaders. With the board reading

Cheong bet 4,300, which his opponent raised to 13,100. Cheong called and the river brought the

. Cheong checked and his opponent bet out 29,000. Cheong thought for nearly three minutes, before his opponent called the clock on him. Thirty seconds into his time bank, Cheong announced he was all-in, which his opponent quickly called. “Nut flush,” Cheong said after the call showing

Thursday, the remaining players from the three Day 2s will combine for the first time and continue play. The money bubble isn't expected to burst until Friday. Action will begin at 1200 PDT (2000 BST), and players will be spread across the Brasilia, Amazon and Pavilion rooms in the Rio. Play is scheduled for five levels on Thursday.

To make sure you don't miss any of the exciting action as history is made in the 2012 Main Event, make sure you check out the live reporting blog for all the updates.

Video of the Day

Today's video of the day is Kristy Arnett's The Straddle, where she once again takes a look at all of the behind the scenes action from the 2012 World Series of Poker. This week, Arnett takes part in a bottle-throwing contest, shows an interview with Ryan D'Angelo that hit the cutting room floor, and more.