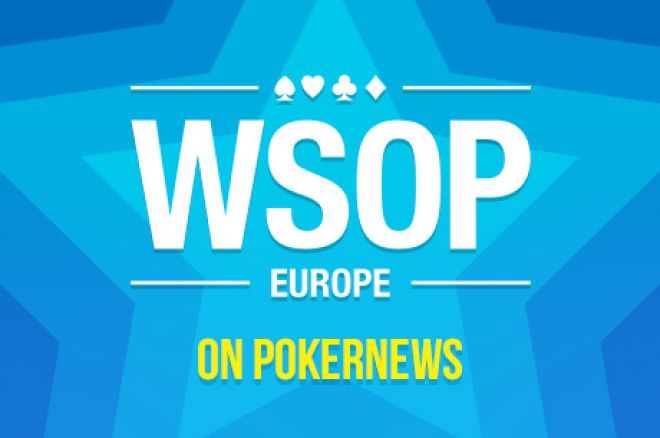 The 2015 World Series of Poker Europe rolled on on Saturday with Day 3 of action from Berlin, Germany. Like Friday, two events were on the docket, with Event #1: €2,200 Six-Handed No-Limit Hold'em crowning the first gold bracelet winner of the festival and Event #2: €550 "Oktoberfest" No-Limit Hold'em playing the final two starting flights.

The first gold bracelet was awarded to Greece's Makarios Avramidis on Saturday after he topped the 197-player field to win €105,000 in Event #1: €2,200 Six-Handed No-Limit Hold'em. Avramidis defeated Germany's Frederic Schwarzer to earn the title.

Avramidis is a Greek native turned German restaurant owner, but he can now add that he is a WSOP champion. It was a hard-fought, three-day battle that Avramidis had to endure in order to reach the winner's circle, and after he had won it seemed he couldn't quite believe what had happened.

"I don't even understand yet what has happened," Avramidis told PokerNews through an interpreter. "I have played European Poker Tour tournaments for a few years and never even reached the money. This is just a really fantastic feeling. It is probably going to take a bit of time to realize what has actually happened here."

On the final hand of the tournament, Avramidis's

to earn the victory. The money went in preflop and the board ran out

"The Oktoberfest" Moves On To Day 2

Also taking place on Saturday was Day 1c and Day 1d of Event #2: €550 "Oktoberfest" No-Limit Hold'em. The first of those two flights attracted 552 entries, and the second drew 774. When combined with the 375 entries from Day 1a and the 473 entries from Day 1b, the total field size for this event clocked in at 2,174 entries.

With all of the opening events in the books, just 173 players remain. They'll return for action on Sunday's Day 2 at 2 p.m. local time, and it will be Luca Deiana taking the overall lead into action. According to the WSOP.com chip counts, Deiana bagged up 345,000 in chips to put himself in front by a hefty margin over Paul Rieger's second-place stack of 225,000.

Be sure to stay tuned to PokerNews.com from now until Oct. 24 as we continue to provide coverage from the 2015 WSOP Europe.