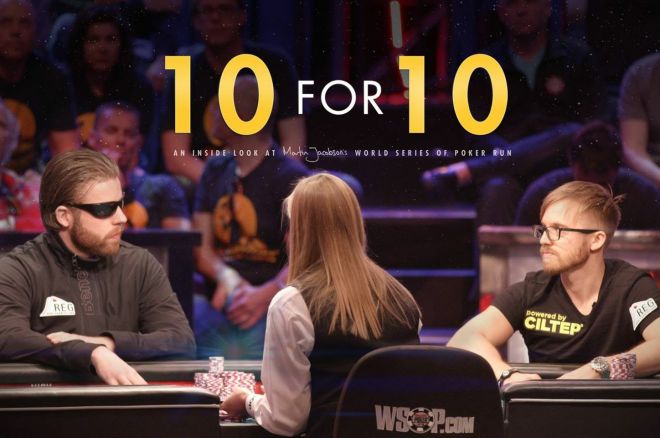 In less than a month, a new World Series of Poker Main Event champion will be crowned. Consequently, the reign of 2014 WSOP champ Martin Jacobson will come to an end. Few would argue the Swede hasn't served as an honorable ambassador, which came as no surprise for the well-rounded poker pro, who put in what is largely considered the best final table performance in WSOP Main Event history in his way to winning $10 million.

Over the past couple months, NaturalStacks, Jacobson's sponsor during his Main Event run, incrementally released 10 for 10, a 23-minute film documenting Jacobson's run from making the November Nine to winning the gold bracelet. The entire documentary is now out – which you can view in full below – and not only has it been a hit among poker fans, but it's proved satisfactory to the man himself.

I've really enjoyed my year as a champ but the show must go on as they say.

"Overall I'm very pleased and the feedback has been 100% positive so that's awesome," Jacobson told PokerNews when asked about his thoughts on the documentary. "I personally think the introduction is a little bit slow but once it hits the halfway mark it definitely makes up for it. Goosebumps never lie."

The documentary does a great job rehashing the final table action, and even showing Jacobson's preparation in the days leading up to the finale. However, did it show everything Jacobson expected?

"I think so. To be honest I don't remember much from the shooting as I was so focused on my preparation and everything else surrounding the final table. I know the film crew ended up with a ton of raw material, and that is why it took so long to edit. In the end I think they did a fantastic job of sorting out the best parts. The trailer and the ending is world class in my opinion."

But would he change anything if he could?

"Two things,: Jacobson quipped. "The first being the introduction. I would have preferred to make it a bit more tense and intriguing. The other thing would be the music but I guess that's more of a personal preference. It's also difficult to get the rights to use established tracks since they're usually protected by the producers."

In regard to his current relationship with NaturalStacks, Jacobson continued: "It's great. I love to be a part of an exciting and young company which interest lies in reaching a state of optimal health and performance. We share a lot of similar ideas and values when it comes to supplementation. They're actually in the process of developing a new formula, which I suggested this summer and I'm very excited to see how it turns out."

Jacobson is currently in Berlin for the WSOP Europe, and he says while the fields aren't as big as the regular WSOP, he has a "soft spot" for the European version and is looking forward to becoming the first player to win the Main Events of both the WSOP and WSOP Europe in the same year.

It's a lofty goal, and even if it doesn’t come to fruition Jacobson is looking forward to enjoying his reign for one final WSOP Event. That said, he doesn't have any qualms about passing the title along

"I've really enjoyed my year as a champ but the show must go on as they say," Jacobson offered. "I think the fact that I will forever be the 2014 World Champion eases the transition and makes it less of a big deal in comparison to other sports. For example, in boxing there's only one number one and the competition at the top is a lot tighter than it is in poker. You have to give up 'your' belt to your rival and everything that comes along with it. Although I gave it my best, it would have been kinda unrealistic for me to expect to defend the title in a field of 6,000+ competitors. And I get to keep my precious, the bracelet."