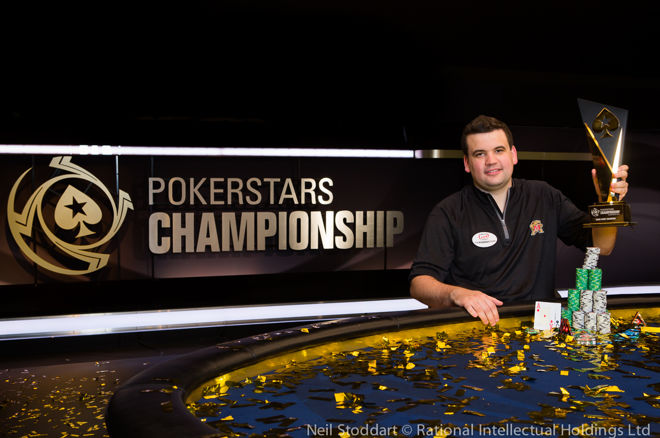 Christian Harder has won the first PokerStars Championship Bahamas Main Event for $429,664 after striking a deal with his former backer Cliff Josephy heads up.

The six-handed final table started at noon and would become five-handed quick enough. Rasmus Glæsel lost some chips early on and said his goodbyes in the seventh hand of the day after losing a flip with ace-king to Josephy's pocket tens. There was no ace, king or other escape outs for Glæsel and the Norwegian poker player hit the rail in sixth place, good for $103,780.

It would take another 99 hands and several hours before the next player had to go. The start-of-day chip leader, Michael Gentili, saw things go sour in the 106th hand of the day as he doubled Aleksei Opalikhin with deuces to the Russian's aces. Gentili was extremely short after that and called all in the next hand with nine-seven to Josephy's king-ten suited. Both paired up but Josephy's hand remained the better one and Gentili went home with $140,940 for his fifth-place finish.

While Opalikhin had won most of Gentili's chips, he would be the next to go as he too lost a big flip to Josephy. This time Josephy had pocket nines while Opalikhin brought king-queen suited to battle. A board no higher than a ten left Opalikhin extremely short and he was gone the next hand. Michael Vela had pocket kings and knocked out Opalikhin, who did not connect enough with ten-nine off suit.

Again, the one responsible for the knockout was next to go. Vela found himself short and squeezed all in with ace-six suited. He was called by both Harder with ace-queen and Josephy with king-jack. Vela paired his six but four diamonds made a flush for Josephy and sent Vela packing in third position.

After the elimination of Vela, the two remaining players reached an agreement in their deal talks. Harder secured himself $419,664 while Josephy had $403,448 locked up after the deal, with $10,000 still left to play for.

Christian Harder made the final table of the PokerStars Caribbean Adventure back in 2008 where he finished seventh for $200,000, only his second live cash ever. Harder returned every year, and now, on his 10th straight trip to the Bahamas, he was in a position to take it down. Across from him sat Josephy who was his backer in 2008 when he hit the spotlight here. Josephy, who finished third in the 2016 World Series of Poker Main Event for $3,453,035 and won a side event at the WPT Five Diamond World Poker Classic for $163,250 last December, started with nine million in chips to Harder's 12 million.

It didn't take long as Josephy lost chips at rapid pace, getting outkicked by Harder on more than one occasion. Soon enough, it was all over; the two poker friends got it in with ace-eight for Josephy and ace-jack for Harder. The board bricked out for Josephy and he had to settle for second place. Christian Harder, after having finished seventh in this event in 2008, is now the winner of the PokerStars Championship Bahamas!

The first PokerStars Championship is on the books and the next one up is in two months when the elite PokerStars live tournament sets foot in Panama for the first time. PokerNews.com will be on the floor for that event too, so be sure to follow the live updates coming from Panama's capital March 11. The PokerStars Festival London kicks off next week and PokerNews will be there for all your PokerStars events updates, so keep your eyes on PokerNews.com.