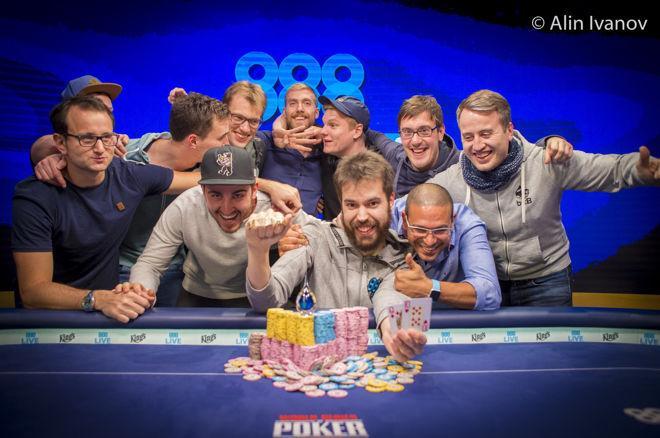 Earlier this week, 888poker Ambassador Dominik Nitsche came out on top of a star-studded field of 88 unique entrants, who made 44 re-entries between them, in the €111,111 High Roller for One Drop event at the 2017 World Series of Poker Europe festival.

This latest victory was Nitsche’s fourth in a WSOP event, meaning Nitsche now was four WSOP bracelets to his name. The talented German’s previous three bracelets stemmed from wins in $1,000 no-limit hold’em events, so the €111,111 buy-in here made it extra special for Nitsche, as did the monster-sized €3,487,463 he took home as a prize.

While Nitsche was obviously delighted with winning fourth bracelet, he told PokerNews that he was more happy with how he played, with hours of off-the-felt study paying off.

“It’s really nice, it’s not about the bracelets for me, it’s how well I played. I’m more proud of how I played rather than I won. I’ve put a lot of time recently into heads-up cash games so I felt comfortable all the way through. I felt like I was the strongest player and made no mistakes. I played perfect, there was nothing I would change.”

The €3,487,463 cash prize awarded to Nitsche is by far the largest score of his illustrious career; Nitsche’s previous largest live tournament prize weighed in at $654,797. With the money from this excellent result added to his lifetime winnings, Nitsche can now boast of having won $11,357,338 from live poker events, an impressive sum that places him fourth in the German all-time money listings, and when you consider only Ole Schemion, Christoph Vogelsang and Fedor Holz are above Nitsche in those standings, it is quite an achievement.

Although he already has a quartet of bracelets to hand, Nitsche is on the hunt for more.

“I compete in the high-rollers because I love battling with the best so to finally win one of those feels fantastic. I'll be looking forward to winning number five now because winning tournaments is fun.”

Nitsche spoke to PokerNews at the end of Day 2 of the High Roller for One Drop and discussed a key hand that took place against Russian star Alexander Kostritsyn, a hand where Nitsche highlighted his thought process and gave some insight into how he narrows an opponent’s range when he locks horns with them at the table. You can check out the full article and accompanying video here.

This is the second WSOP bracelet of the year for the 888poker ambassador stable as Chris Moorman finally got his hands on one in the summer. Moorman took down the $3,000 no-limit hold’em six-handed event in Las Vegas to secure gold and $498,682 in prize money.