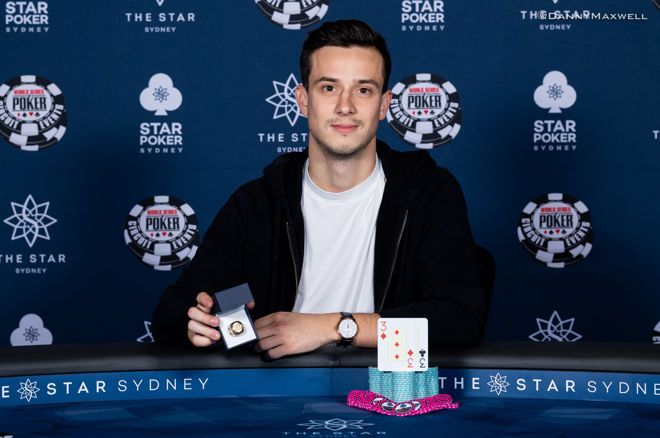 After seven days of thrilling poker, Australia’s Alex Lynskey has triumphed over a field of 1,191 entries in the 2018 WSOP International Circuit Sydney Main Event. Lynskey beat Matt Pongrass heads-up at The Star to take the WSOP Circuit Ring along with the A$442,796 top prize and entrance to the season-culminating WSOP Global Casino Championship.

“I feel fantastic,” said Lynskey straight after the final hand. “It went crazy fast in the end. Was expecting the final table to last seven to eight hours. Went way quicker and smoother than i expected especially with those five knockouts in the first 45 minutes,” he added.

Asked how he felt about the heads-up battle with Pongrass, Lynskey continued “It was swingy as hell. I was down to four and a half million against his thirty million and got it in with ace-ten against kings and hit an ace and spun it up from there. Then got insanely lucky again on that last river.

Asked how this win compares to other tournament and that WSOP main event run, Lynskey said “It’s my biggest score for winning a tournament. And on home soil i couldn't be happier. It always feels better to win so this is a better feeling than that (his 7th place finish in the WSOP main event).

Next up for Lynskey is the Aussie Millions were he will hope to add more results to an already impressive poker resume. Today’s first place finish see’s Lynskey rise to 6th on Australia’s all time money list passing the likes of Kahle Burns, Mel Judah and Michael Addamo in the process.

The final table started with a bang with five elimination in just over an hours play.

Cameron Chen started the final table as the second shortest stack. He would find himself all in with ace-jack and be behind to Lynskey’s ace-queen and wouldn’t improve to be the first player out.

Moments later, in a blind versus blind situation, Justin Layden open-shoved his ace-king and ran into Lynskey's pocket queens and would become Lynskey’s second victim in a row after the board bricked out

Barry Forrester took his chance next when he raise-called an all in from Pongrass. His pocket eights were in bad shape against Pongrass’ pocket queens, and we’d be down to seven.

John Sormi started the final table as the short stack but was able to manoeuvre his way to sixth place where he was taken out by Lynskey. Sormi was the first player to get it all in ahead with his ace-nine dominating Lynskey’s queen-ten. However, Lynskey would flop two pair resulting in Sormi hitting the rail.

Sam Capra was the feel good story of the whole tournament. During the middle of Day 2 Capra only had 11,000, which was less than one big blind at the time. He was able to spin it up to eventually finish in fifth place collecting a mammoth six-figure score for his efforts. He would also find himself in front holding ace-nine versus Lynsey’s jack-ten but would fall when Lynskey spiked a pair on the turn.

Lynskey had already busted four of the five players on the table before he made it five, eliminating Luke Martinelli in 4th place. Martinelli committed his chips in on the turn with a flush draw but couldn't improve against Lynskey who had top pair. A fantastic week for Martinelli came to an end, accumulating over A$500,000 in two tournaments after also winning the $20,000 High Roller just three days ago.

The final three just happened to be the three players who started the day as chip leaders. Lynskey started three-handed with 16 million in chips and led Pongrass who had 11 million and Rahul Rastogi who had nine million.

Rastogi would fall in third place after an all in shove at the wrong time saw him almost drawing dead when the cards where shown. His jack-three was no match against Pongrass’ pocket jacks and his day came to an end. His third place winnings would amass to more then three times his lifetime earnings in one go.

Heads up saw Pongrass have an almost six-to-one chip lead against Lynskey. Pongrass pressured early and dwindled Lynskey down to just three million in chips at one stage. The heads-up battle took a dramatic turn when Lynskey found himself at risk holding ace-ten versus Pongrass’ pocket king and looked like being eliminated. An ace flopped and Lynskey doubled up to eight million. From then on he never looked back, and in less than and hour had the tournament won.

The final hand saw Pongrass call all in with pocket sevens and had Lynskey’s pocket three's dominated. Everything was going to plan until the three spiked on the river to see Lynskey take down the pot and the tournament.