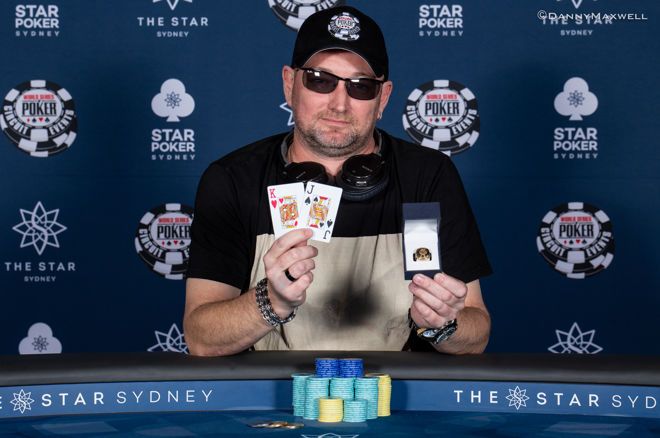 It was a day of firsts here at the WSOPC The Star Sydney. This event marked the very first World Series of Poker Short Deck Hold'em Event. But not only that, it was Robert Sutherland's first time ever playing Short Deck Hold'em. In fact, until today he'd never even heard of the game.

"I didn't know what it was until I came across it today."

"I didn't know what it was until I came across it today," Sutherland said about Short Deck Hold'em. "And, I'll tell you what, for someone who enjoys gambling, I could not have enjoyed myself more. It is a great game."

Along with that, this event also marked Sutherlands first World Series of Poker Circuit ring. Sutherland said that he won a satellite into the Main Event earlier in the week, but didn't make it past level 12. So instead, he hopped into the Short Deck event and fell in love with a brand new game.

"To be honest, a friend of mine from Brisbane actually said, It's like you're high on steroids. And I loved it," Sutherland explained. "I absolutely loved it."

For Sutherland it was pretty smooth sailing once, during the midway point of the day, he won a monster pot against Robert Harrison. Sutherland got Harrison to pay off a monster bet when he rivered a full house to crack Harrison's aces. The pot was the biggest in the tournament up to that point, and he won it with his favorite hand — Queen-jack. From there, Sutherland had a clear path to victory, having nearly 10% of the chips in play with over 30 players left.

Sutherland employed an aggressive strategy at the final table, raising early and often and mostly having the good when he got caught. There were, of course, a few missteps and some learning errors, but by the end of it, Sutherland seemed to have a firm grasp on the game.

"for someone who enjoys gambling, I could not have enjoyed myself more. It is a great game."

"I met someone in line who gave me some advice," Sutherland said of his strategy. "He said, Don't play your small cards. Don't play 'em. They're a waste of time. Wait for your position with the larger cards. I learned as I went. Several times I hit some bad luck but was lucky enough that the person that hit me didn't have as much as I had. After a while, I came up with my own way of playing the game I suppose."

In the end, Sutherland managed to take out half of his final table opponents, dispatching of Constantine Harach, Kresimir Kardum, Nathan Zappia, and Jarryd Godena as well. When heads-up play arrived, Kardum and Sutherland were both pretty even in chips, but they got all the money in with a giant flip for over 95% of the chips in play. Sutherland held pocket sixes and flopped a set against Kardum's ace-ten suited. Kardum didn't catch up and was just down to just over one big blind.

Kardum did manage to double back a few times, but he couldn't keep it up, Sutherland dispatched of him at the end holding king-jack against queen-seven to end the tournament. For his run, Sutherland locked up the first place prize of $37,152 and a World Series of Poker Circuit ring.

"It's like you're high on steroids. And I loved it. I absolutely loved it."

In total, the event brought out 172 entries and re-entries with the likes of Jan Suchanek, Jeff Lisandro, Andy Lee, Warwick Mirzikinian, Dean Blatt, Jordan Westmorland, and Sam Khoueis all coming out to play to name a few. None of those players made it into the money. Only 18 players actually made it to the payouts with notables such as Jason Gray (17th - $1,845) and Chad Awerbuch (9th - $3,311) earning cashes.

That does it for our coverage of this event, but be sure to tune back in later as the $1,150 No-Limit Hold'em Monster Stack kicks off later in the day at 2:15 p.m. local time and Day 3 of the Main Event also starts up as well with players playing down from 27 players to a final table. PokerNews will be back to cover it all so make sure to check back in.