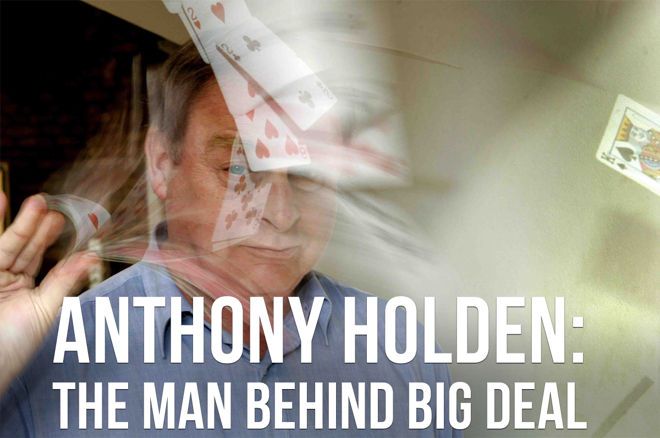 Anthony Holden, or simply Tony if you will, changed the face of poker several times — not by winning a major tournament, but through the power of the pen. His books which include 1990’s Big Deal: A Year as a Professional Poker Player, Bigger Deal: A Year on the New Poker Circuit, Holden on Hold’em, and his most recent book, He Played Poker for His Wife and Other Stories – have become classics among poker fans.

However, they are just a small sampling of his literary prowess, which includes being named Young Journalist of the Year in 1972, News Reporter of the Year in 1976, and dozens of non-poker works such as A Week in the Life of the Royal Family, Queen Mother, and Charles: A Biography.

Holden, who in 2009 became the first person elected as President of the International Federation of Poker (IFP), is arguably best known to poker fans for the aforementioned Big Deal, which highlighted his experiences playing the WSOP in 1988-89.

Holden, who won TV's first Celebrity Late Night Poker on Channel 4 in 2000 for $10,239, hasn’t been in the poker spotlight as of late, but for good reason.

What most of the poker world might not know is that Holden, who resides in London, suffered a severe stroke in August 2017, one that left him confined to a wheelchair with his left arm and leg inoperative. Fortunately, the stroke did not impair Holden’s memory and cognitive skills.

"I think it would be much harder to weave so rich a tapestry in today's tech-dominated world."

“l can still spend most of all day everyday writing, as l always have,” Holden tells PokerNews. “The only difference now is that, with only one functioning hand (i.e. finger), the whole process is much slower and more laborious. My many friends and large family – I am lucky enough to have three sons and four grandchildren, not to mention two ex-wives (one of them Cindy, the ‘Moll’ of Big Deal, to whom I am technically still married) – are all, I am pleased to say, regular visitors.”

Speaking of his classic work, Big Deal, Holden looks back on what was a truly unique time in the poker world.

“I think it would be much harder to weave so rich a tapestry in today's tech-dominated world,” said Holden. “I would say that Big Deal is now really a history book or a period-piece; it emerged from a much more colorful but now bygone world, pre-internet, pre-much poker on TV, when the WSOP was still based in Glitter Gulch at Binion’s, whose eponymous founder and his family were still around to offer gold-standard anecdotes and bottomless pits of rich eyewitness material.”

He continued: “As indeed were such poker greats as Johnny ‘The Man’ Moss, ‘Puggy’ Pearson, Amarillo ‘Slim’ Preston and others of an era now represented only by the likes of Doyle Brunson, Bobby Baldwin and Eric Drache, then the WSOP tournament director - who had just invented the satellite, without which my whole adventure would never have happened.”

He Played for his Wife and Other Stories

Holden has written about his own experiences in poker, but we couldn’t help but wonder if any poker personality has appealed to him for a possible biography, especially given he’s a renowned biographer for the likes of Shakespeare, Tchaikovsky, and Laurence Olivier.

“You may find this answer a tad perverse, but I have always wanted to write a life of Herbert O. Yardley - a pioneering early poker-player, for sure, but also the author of one of the first and greatest of all poker books, The Education of a Poker Player.”

Without missing a beat, Holden offers some information on Yardley, who was born in 1889 and became an expert cryptologist. As Holden told it, Yardley founded and led the so-called US Black Chamber, and helped crack German and Japanese codes during World War I.

“An MGM movie based on one of his books, Rendezvous, was made in 1935, starring William Powell and Rosalind Russell,” Holden added. “So, there is no shortage of material there, and it would surely be intriguing to explore the link between the reading of cards and the cracking of codes.”

While a Yardley biography is on Holden’s mind, he’s currently engaged in promoting his newest book, He Played for his Wife and Other Stories, which is an anthology of short stories about poker by various contributors.

“The idea first came up while I was President of the International Federation of Poker,” said Holden, who served in that position until 2013. “But there was never time to get around to it. My dear friend, Natalie Galustian, a literary agent whom I first met when she was a rare book dealer specializing in historic poker books, suggested a couple of years ago that we revive the idea, commissioning new stories for the volume to supplement the wonderful title-story, which comes from a 1890s New Yorker who wrote a tale about betting his wife - and losing.”

Among those featured in the book are playwright Patrick Marber, actor Neil Pearson, novelists D.B.C. Pierre and David Flusfeder, and poker pros such as Jennifer Tilly and Barny Boatman. In addition to Holden, poker writers James McManus, Peter Alson and Michael Craig all contributed, as did UK poet laureate Carol Ann Duffy.

Through his work, Holden has changed poker, and in return, the game has changed his life, which has trickled down to the rest of his family.

“All three of my sons are canny occasional poker players, if not regulars,” Holden admits. “l used to play with my own sons regularly – not least a Christmas Eve knockout tournament played to the soundtrack of Guys and Dolls; but I must leave it to them whether or not they encourage their own children to become cardsharps.”

Right now, it looks as if things are headed in that direction.

“Last year, my 10-year-old grandson George was so excited about winning the one bet per annum that is placed on a horse for him that his parents are now worried he's inherited my gaming gene,” Holden says. “And my seven-year-old granddaughter walked in here the other day, picked up a coaster and said excitedly, and quite rightly, ‘This looks like a poker chip!’"

Amazingly, Holden’s passion for poker hasn’t waned after more than four decades in the game.

“Yes, I still love the game, though I don't, alas, now play as regularly as I have for most of my life. These days I prefer the camaraderie of my home game to the deadly seriousness of public casinos or card rooms. The WSOP, especially the Seniors and the Main Event, remain as alluring as they have since my first visit in 1977, but I very much fear that my stroke now means I’m unlikely ever to make it to Vegas again.”

It’s a sad thought that Holden may never again make it to Sin City, but it’s not for lack of competitive spirit.

“It's the traveling that's beyond me,” he says. “I recently asked my pal Barny Boatman if he thought someone could play with one hand in a wheelchair and he said ‘I think it rather depends whether they could play in the first place!’”

Poker Plans and the Hall of Fame

While Holden may not be at the WSOP this summer, he’ll certainly have an influence.

“I revere the Poker Hall of Fame and take great pride and care in my annual vote,” he explains. “Given the strict criteria, however, there would have to be a separate Hall of Fame for poker writers to see the likes of me standing any chance of making it in there. That's not a bad idea, actually.”

"I am currently writing some memoirs, which should clearly reflect the way poker has weaved its hypnotic way throughout the whole of my life."

“I was working on an annual award for writers called the Herbert O. Yardley Award when I was at IFP - but again, alas, that adventure ran out before I could get around to it,” Holden says. “The only living writers who might stand a chance of making it into the Poker Hall of Fame proper are, to my mind, Jim McManus and Michael Craig.”

McManus and Craig, who wrote Positively Fifth Street and The Professor, the Banker, and the Suicide King respectively, no doubt feel the same way about Holden, who despite his health issues has no plans on slowing down when it comes to writing.

“I am currently writing some memoirs, which should clearly reflect the way poker has weaved its hypnotic way throughout the whole of my life, both private and professional. The trouble, really, is that I've told all the best stories before, but I'm wracking my brains for a few more quirky tales from the baize. In the book I am writing right now, I shall be revealing a startling new detail, never told before, about the $1,000 satellite I won at Binion's to qualify for the 1988 WSOP Main Event, starting that whole year masquerading as a poker pro which became Big Deal and remains one of the happiest times of my life.”

Holden also mentions 2008 as another highlight of his storied career. That is when he served as a PokerStars-sponsored player and gathered information and experiences to write Bigger Deal.

“I have especially enjoyed playing with people I might otherwise never have met, such as Telly Savalas and David Mamet,” Holden fondly recalls. “And I shall always treasure the memory of winning British TV's first Celebrity Poker event in 2000 against such titans of the baize as Martin Amis and Victoria Coren.”

What Holden might not realize – and even if he did, surely wouldn’t admit – is that he himself is a titan of the poker world. You might not know it, but he’s kind of a big deal.

PokerNews Book Review: He Played For His Wife... And Other Stories