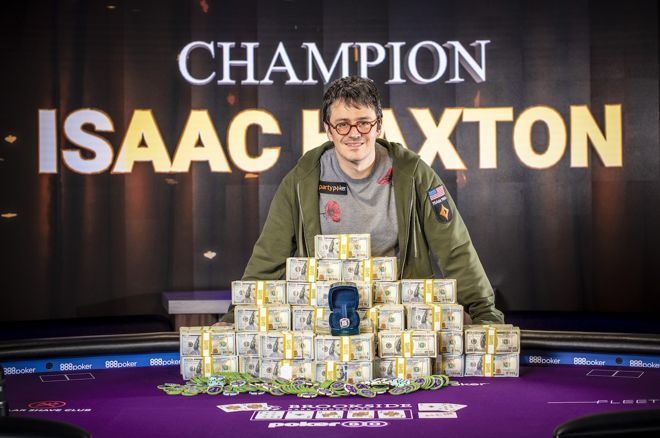 "This is my biggest score ever and easily the best accomplishment. This is the highlight of my tournament career.”

"This is my biggest score ever and easily the best accomplishment," Haxton said to Poker Central after the win. "This is the highlight of my tournament career.”

Haxton surpassed the $20 million mark in a big way with this win and now has amassed $23,654,395 in live tournament winnings according to The Hendon Mob. He jumped from 20th to 13th place on The Hendon Mob All-Time Money List passing the likes of Jake Schindler, Scott Seiver, Jason Koon, Phil Hellmuth, Brian Rast, Sam Trickett, and Mikita Badziakouski. The latter bubbled the final table in the SHRB.

At the end of October, the SHRB announced that its $300,0000 rake-free tournament would move from its position at the end of May, to end of December. For the first time, the field didn't reach its max capacity with 36 entrants buying in.

According to the Poker Central Blog, the seven-max final table began on the third and final day with Haxton in the lead, closely followed by Stephen Chidwick.

Early on in the day, Alex Foxen claimed the lead from Haxton after winning a big pot off of Igor Kurganov. Haxton reclaimed the lead with the elimination of Ali Imsirovic in seventh place for $540,000. Imsirovic, who entered the final table with the shortest stack, four-bet jammed preflop with pocket jacks and couldn't hold after Haxton nailed a flush with ace-five suited.

Kurganov was the next to go. Stephen Chidwick opened before Kurganov three-bet shoved with pocket sevens. Talal Shakerchi four-bet jammed with pocket tens over the top and Chidwick folded. Shakerchi's hand was ahead the entire way, and Kurganov was eliminated in sixth place for $756,000.

The chip lead then changed twice, first to Shakerchi before Foxen reclaimed it for the second time at the final table. Foxen then extended his chip lead further after he eliminated Adrian Mateos in fifth place for $972,000. Mateos headed for the exit after he four-bet jammed pocket nines and was unable to win a flip against Foxen's big slick.

A little later, Foxen piled on more chips and had an approximately a 3:1 chip advantage against his closest opponent Haxton. Haxton then went on a roll eliminating his final three opponents. First to go was Shakerchi in fourth place for $1,188,000 after his ace-ten couldn't outrace Haxton's pocket nines.

"I don’t think it changes anything about the player I am or my legacy, but damn does it feel good to win a tournament."

A short while later, Haxton won another race. Chidwick four-bet jammed with ace-queen and was eliminated in third place for $1,512,000 after he wasn't able to beat Haxton's pocket jacks.

Foxen entered heads-up play with a small chip lead against Haxton. During the first hand of heads-up play, Haxton took the chip lead back to claim a 2:1 chip advantage. Haxton was able to further extend his lead to a 7:1 advantage when the final hand took place.

Haxton four-bet jammed with king-jack, and Foxen called with ace-eight suited. Foxen appeared to be in good shape when an ace spiked the flop. However, Haxton made runner-runner two pair to win the hand and Foxen was eliminated in second place for $2,160,000.

Meanwhile, Haxton will go down as the fifth SHRB champion and walked away with $3,672,000 and the coveted Super High Roller Bowl ring.

Haxton felt good about his victory but didn't want to put "too much significance" into one tournament.

"It’s easy, in the moment, to fall into putting too much significance into one tournament," Haxton said to Poker Central" "It’s a 36-player event, and I was the luckiest guy this time and won. I don’t think it changes anything about the player I am or my legacy, but damn does it feel good to win a tournament."