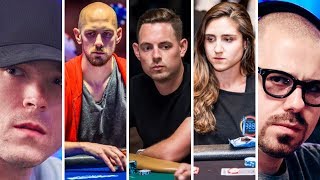 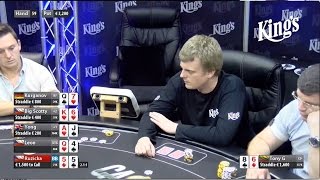 Global Poker Masters: Who is Your Biggest Competitor?

He was supposed to become a football player, but a serious knee injury made Sam Trickett switch his career to poker. The decision turned out to be a good one as Trickett became one of the most successful British poker players. He won millions playing live poker tournaments and was named the 2011 European Poker Player of the Year, and Britain’s Best Cash Player the same year.

Sam Trickett is a professional poker player from Nottingham, UK. In the live tournament circuit Trickett is best known for winning the 2011 Aussie Millions A$ 100,000 High Roller event for $1.5 million, then taking down the Partouche Poker Tour Main Event in Cannes for 1 million euros a little later that very same year, and of course for his runner-up finish at the biggest poker event in history, The Big One for One Drop collecting more than $10 million in prize money.

Trickett was born in 1986 in East Retford, United Kingdom. As a teenager he pursued a career as a professional football player, but in 2005 Trickett suffered an injury which ended his football-playing days and made him seek a new career. That was when Trickett discovered poker. He started playing at local casinos and soon brought his newly acquired skills to the online felt. Trickett who is also known by his online alias “Tricky” started from the $10 S'n'G’s and went to the top from there.

Trickett made his first World Series of Poker money finish in 2008 by placing 4th in the $5,000 No-Limit Hold'em event taking home more than $240,000. He came back to Vegas two years later for a much better record, six WSOP cashes including one runner-up finish. Trickett placed second in the $5,000 No-Limit Hold'em event falling just short of his first bracelet. He lost the final battle to Jason DeWitt and collected a little over half a million dollars for his performance.

Trickett scored three more WSOP cashes in 2011 including the fourth-place €77,642 he collected at the WSOPE €5,000 Pot-Limit Omaha event in Cannes. However, Trickett's biggest WSOP moment came in 2012. The British pro was one of the 48 to put in the $1 million buy-in and play for the largest first-place prize in poker history at the WSOP's The Big One for One Drop. Trickett was very close to winning that tournament, however he eventually lost the heads-up match to Antonio Esfandiari and took home juts over $10 million for his second place finish.

So far Trickett has several European Poker Tour cashes to his name. He made his first attempt at winning the EPT trophy in 2010 Vilamoura Main Event. Trickett finished the tournament in fourth place for almost €140,000. One year later he made another EPT final table in London. Trickett finished seventh at the £20,000 High Roller event which was good for £68,800.

In 2008 Trickett came out victorious in the Grosvenor UK Poker Tour Main Event in Luton collecting the £109,050 first-place prize. Two years later he scored another big finish taking down the PartyPoker.com World Open VI in London. His Main Event win gave Trickett's bankroll a $200,000 boost. The year 2011 was the highly successful for the young Brit in terms of winnings and titles. He started off by finishing first at the Aussie Millions A$100,000 High Roller event and taking home $1.5 million. Then just a few days later he came in second in the A$250,000 Super High Roller collecting another $1.4 million.

Then in September Trickett won the Partouche Poker Tour Main Event taking home €1 million in cash. In 2012 Trickett scored another big money finish at the $258,000 Super High Roller event at the Macau High Stakes Challenge. He placed seventh in that event for just short of $1 million.

Sam Trickett is an ambassador for Everest Poker.

Everest Poker is thrilled to have Europe's most successful poker tournament player, Sam Trickett as their latest member of Team Everest, and is now celebrating Trickett's signing by giving you a chance to share some of his 2014 World Series of Poker (WSOP) winnings!

If you are not already excited by this, you should be, since it isn't often you will have the opportunity to share in on the profits of one of the most successful tournament players of all time in the biggest live poker events of the world.

Trickett has won almost $20 million in live tournament earnings, and from May 27 through July 14 he plans on playing 20-30 events giving away 10% of his WSOP tournament winnings (excluding the One Drop) to loyal Everest Poker players.

How do I get involved in this amazing promotion?

There are two separate ways you can share with other players 10% of Sam Trickett's WSOP success this year. The promotion is broken out into two teams - Team Diamonds and Team Hearts. The qualifications for each team are listed below.

You can qualify for both teams even further multiplying your share of Trickett's winnings!

So don't be left out wishing you were railing Sam Trickett to victory this summer. Hurry up and sign up to Everest Poker through PokerNews today and start earning your share of one of poker brightest star's WSOP winnings!

Be sure to read all the T&Cs regarding this promotion on the Everest Poker site.