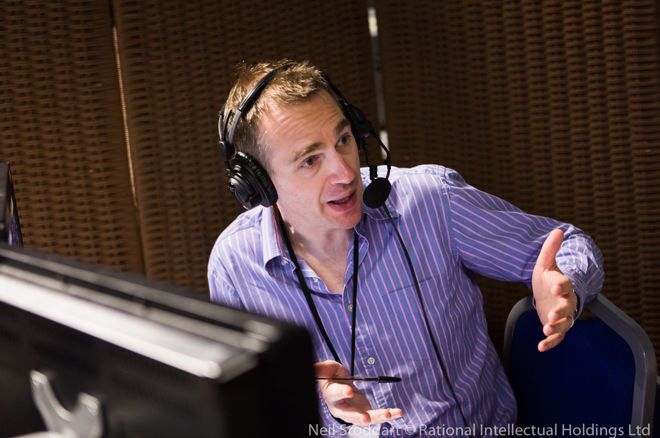 In a couple of weeks, a unique event takes place in The Bahamas, as part of the PokerStars Caribbean Adventure (PCA). The $25,000 buy-in PokerStars Players No-Limit Hold'em Championship is a one-off because 320 tickets to the event have been given away for free as Platinum Passes, adding $8 million to the prizepool.

PokerNews recently talked with James Hartigan, presenter and producer of the PokerStars European Poker Tour and associated events, about what the upcoming PSPC means for poker players and fans.

“Everyone knows it’s the tournament to play because of those qualifiers, and because of the $1 million added to first place.”

“I think it’s the perfect mix,” says Hartigan. “The thing I love about poker more than anything else are the Moneymaker stories. Let me go back to the beginning of the poker boom. There were many factors with hole-card cameras and online poker starting, but Moneymaker was what lit the touch paper. It was such a great story that everyone bought into. Ever since, I’ve always liked that in any single tournament on any given day, anyone can win. Those people who are the aspirational qualifiers who could win big are always what’s attracted me to poker. We’ve been putting videos out on a weekly basis to meet the Platinum Pass winners. They’ve not got X Factor style sob stores, but you just really want them to do well. They’re mostly average joes who love poker and have the shot of a lifetime.”

The PokerStars Players No Limit Hold’em Championship has also added $1 million to the first-place prize. It’s something which makes Hartigan very proud.

“A lot of focus in the last two years has been put on the size of guarantees. A guarantee only comes into play if your field doesn’t reach a certain size and the operator is then on the line to make good on that guarantee. But the reality is that if you build it, they will come. If you set that guarantee, nine times out of ten, you will hit it, and the operator is contributing nothing, they’re just taking their registration fee. This is genuine added money, $9 million contributed - $8 million by virtue of the Platinum Passes and another $1 million added to first prize. Whatever buy-ins there are, that added money will still be there.”

A Treat for Viewers at Home

Poker fans have always loved to see top players take to the table. But they’re going to get the chance to see players of little experience lock horns with the best in the game.

“People like watching the very best in the game compete. Whether that’s the German high rollers, Daniel Negreanu, or Phil Ivey, the idea that you can mix those together with qualifiers competing against the best of the best in a high roller environment, that is unique. You don’t normally have a $25k satellite, it’s normally the preserve of rich businessmen or elite players. Suddenly throwing in 320 wild cards - some of those are going to be proficient, but let’s say conservatively 250 - it’s never been seen before. Within those Platinum Sass qualifiers, there are some really interesting characters. I think it’s going to be fascinating for an audience to follow those stories and get behind those people whilst at the same time also being able to see the sick moves of those high rollers that we get to watch play the best poker that is streamed and televised.”

PokerStars live streams have typically kicked off on Day 2 of events, but for the PSPC, Hartigan is conscious that they don’t want to miss any of the early drama that comes with qualifiers playing such a prestigious tournament.

“As far as the live stream is concerned, you’re going to get to see every single minute. Normally with a live stream, whether it’s a Super High Roller or a Main Event, we pick up the coverage on Day 2. Here we’re streaming from the very first hand of Day 1. We want to be there to make sure every single Platinum Pass winner has the opportunity to make it onto the stream. We don’t want to pick up the action when we’ve already lost 50% of the field and potentially 50% of the qualifiers. We’re going to follow it from the start all the way through to the finish.

How many of the Platinum Pass qualifiers are likely to make the final table, though? Could they just fall by the wayside? Hartigan has taken some well-qualified advice on that one.

“I don’t make predictions but talking to [Team PokerStars Pro] Igor Kurganov recently, he is adamant that at an 8-handed final table, two Platinum Pass winners are going to make that final table. I joked and said: ‘You mean David Peters’ but he said no, that he’s pretty sure that two random qualifiers are going to make that final table. That would be great. Just a min-cash would be huge because if you’ve qualified for literally zero investment, anything you win is pure profit. A min-cash is going to be in the $30k region, with a free holiday and an experience of playing some of the world’s greats - that is huge. My dream is that we get as many of these guys into the money as possible. If 60-70% of the qualifiers could min-cash, that would be amazing.”

“I look at live poker and think it’s in a really, really strong position right now and it’s a good thing for the game, the player and poker fans.”

As many professionals will testify, taking to the table against players who make unconventional moves can be a completely different test to what they’re used to.

“Their play may not be optimal. We’ve seen it time and time again that the pros sometimes struggle with that because everything that they do is based against players of their own caliber. When they’re trying to put their opponents on a range of hands, interpret their bet-sizing or how long they’re taking in their decision, they’re interpreting that against someone who plays how they play. If you’re up against someone completely random who isn’t considering any of those things, it can throw them off their A-game.

The value in playing the tournament, even to players who might have to step up or sell action, is obviously open to interpretation. But the presence of those platinum passes will likely draw sharks to the pool.

“Everyone knows it’s the tournament to play because of those qualifiers, and because of the $1 million added to first place. In addition to the normal $25k players, I reckon you can look at another 200-300 from the $5k crowd because of its nature.”

Just how many players does Hartigan believe will arrive at Atlantis to play the PSPC? He’s quietly confident of a big number but errs on the side of conservatism.

“I think 750-800 is still pretty conservative, but it’s still going to be a phenomenal prize pool and when you consider the million added, first prize is going to be in the region of $4-5 million. This thing has got to be done in five days, so it’ll be interesting to see what kind of days we have to get down to a final table of six and winner within five days. Joe [Stapleton] and I will be there, then there’ll be various pros from the ‘Stars roster and other players who’ll join us after they’re no longer in the tournament.”

“I think competition is good in any industry. If these events are meant to be about the players, it’s absolutely right that players have choice in the market.”

Recently, PokerStars’ competitors have put on huge events, in The Bahamas, no less, with partypoker's Caribbean Poker Party taking place in November. Hartigan is unequivocal in welcoming the positive effects that competition brings.

“I think competition is good in any industry. If these events are meant to be about the players, it’s absolutely right that players have choice in the market. There’s a variety of events for bankrolls of any level around the world, which is brilliant. I look at live poker and think it’s in a really, really strong position right now and it’s a good thing for the game, the player and poker fans.”

The PokerStars Players Championship takes place at The Atlantis in The Bahamas and PokerNews will be there every step of the way to bring you all the drama from the first deal to the crowning of 2019’s first major title winner.