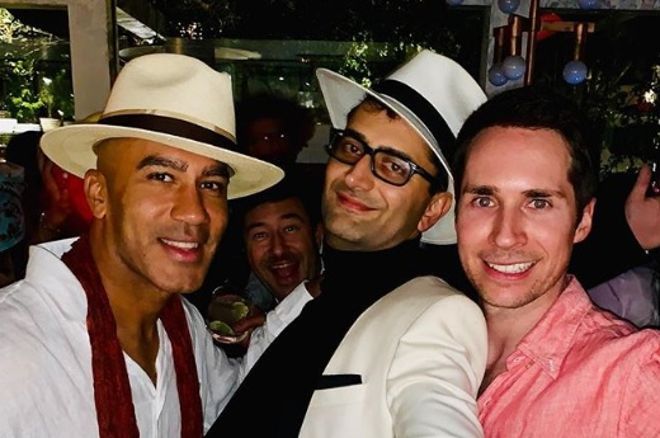 In last week's edition of Off the Felt, we had love in the air and babies on the way, while some others were living it up in Mexico. This time, we have the 40th birthday of Antonio Esfandiari, Bertrand "ElkY" Grospellier getting engaged and the Mizrachi's in South Africa.

Last week, Antonio Esfandiari turned 40 and that was a good reason to organize a great party. Poker legend Phil Hellmuth came over to join the celebration:

In the past few weeks, we saw several poker players getting on their knees to ask their girlfriends to marry them. This week, Bertrand "ElkY" Grospellier did the same and popped the question to Jenny No.

Michael Mizrachi spent some time with Sarah and traveled to South Africa. Sarah posted some great pictures after their trip:

A little throwback by Dan Smith:

Liv Boeree on an all-time high:

On the other popular social media channel, Twitter, there was a discussion about washing your hands after visiting the restroom. Noah Schwartz started about it during the WPT Five Diamond and Daniel Negreanu reacted to point out another interesting thing about unsanitary:

The # of poker players I just witnessed not wash there hands after using the restroom here @WPT Five Diamond is tr… https://t.co/BGA9WHcp8K

@TuckonSports @noahjschwartz @WPT You really think this is more unsanitary than the chips we play with on the dirty… https://t.co/cf1yG8gV0r

@dwpoker @berkey11 This actually makes way more sense. The germs on your hands from playing two levels is infinitel… https://t.co/rNzW8NtIXq

This week, we finish it off with "girafganger7" on Twitter. The online tournament grinder had a lot of fun throwing banter on his Twitter-page:

Thanks for all the love! I'm gonna keep doing this till you guys can't stand me anymore or I get sued. My money's o… https://t.co/zL9aRnGm9s