How an Actor Plays Poker with Michael Greco: Part Two 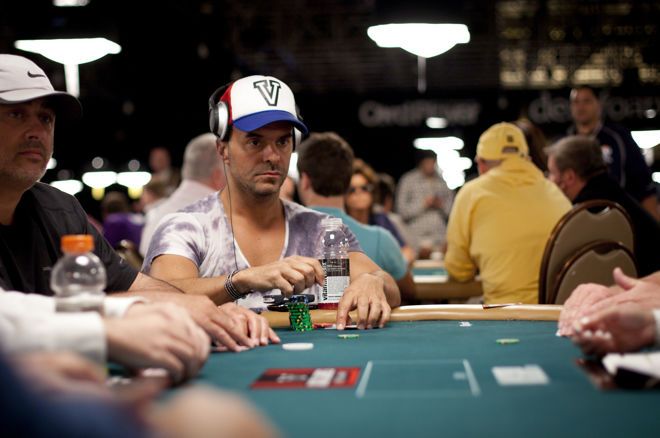 In the first part of our discussion with one of Britain’s most popular actors, Michael Greco spoke about the difference between stage-fright and feature table nerves, how to hide emotion and his latest on-stage appearance in the West End hit, The Greater Game. Now, Greco delves into the way actors control many parts of their poker game, starting with one of the toughest of all - concealing that face that reveals so much on screen with every slight movement.

Most would appreciate the skills that actors have in really becoming a character and selling a plot to the viewers, but as Greco points out, some of the nuance may be lost on non-actors.

“People don’t realize that there’s a big difference between acting in a film or acting on TV. They’re both on screen, so to many people, it should be the same, but it’s not. When someone goes to see you in a film, on a huge cinema screen, the slightest move of your lip or your eye is going to be seen. On TV it’s a little bit bigger than it would be on film because a TV is between 12 inches and 50 inches.

"It’s the same with poker. You can tell a good poker player a mile off.”

Being aware of what the other players can see is a huge part of poker, so does being a screen actor of many years give someone like Greco an advantage in that he knows exactly how he will come across to anyone viewing him?

“Some players you can’t read at all. It’s incredible how they can conceal everything. You have to rely on your instincts. Your first instinct in everything, not just poker, is normally the right one, but you can talk yourself out of it. It’s 50/50 - you’re either right or you’re wrong. Poker is about winning those races, but it’s 50/50 on whether you think someone’s bluffing or not. If you’re winning those decisions, then you’re going to win money.”

For some time, Greco was a fan of using false tells, especially when playing cash games in Las Vegas. But he’s since had a change of heart as to the value of putting false moves out there as opposed to concealing as much as he can.

“It’s difficult to know which opponents to try [false tells] on unless you’ve been sat at the table for a while. I put in false tells in Las Vegas playing cash games and a lot of tournaments. I’m an actor - I’m able to do that. I found it a bit tedious and felt it was better for me to be completely unreadable in every situation. It was just too much effort to pretend and if I’m going to sit there for 10 hours, I think after a while they’re going to know."

"I just wanted to be completely dormant. That for me is the best poker player."

For Greco, it's also a matter of any given player's personality when it comes to what works best at the tables. He contrasts himself and the 'Welsh Wizard' as an example.

"I just wanted to be completely dormant. That for me is the best poker player. You get certain poker players like Roberto Romanello who’s fantastic and who can talk someone into doing something or not. But I’m not that type of player. We have a lot in common because we’re both from Italian families and he’s a great guy, one of the guys I miss from the poker world.”

Taking Gambling Knowledge to the Screen

Just in talking to Greco about poker games he’s been in brings up a huge amount of fondness he still has for the game, and recently, he's found a way to combine two worlds he knows well. Greco has recently put pen to paper and turned scribe on a new television pilot exploring the vagaries of gambling.

“I’ve written a TV pilot about gambling. I’ve dabbled with horses and football betting since I was a young kid, and my dad liked to gamble with small stakes. There’s nothing on TV or Netflix like it. It’s a cross between The Color of Money and Quantum Leap. The pilot talks about how this young kid, our hero, is an incredible magician who can deceive people in many ways. I’ve written a scene in the pilot where the main character can manipulate a poker game as the dealer to deal certain hands to people. We just need to raise funds now to make the pilot. I think if it does well, it’s perfect for Netflix.”

"There’s nothing on TV or Netflix like it. It’s a cross between The Color of Money and Quantum Leap."

Could Greco’s knowledge of poker be bringing him full circle in penning a television series that reflects the true nature of poker to audiences? It’s rarely been done before.

“They don’t often get it right, and it’s infuriating to people in the poker business, because we know that wouldn’t happen in real life. They don’t get advisers or do research. I believe John Duthie was the adviser for the remake of Casino Royale. The way the hand was dealt out is possible. You get stuff in certain naff episodes about poker and think, ‘Well, that’s ridiculous,’ but the general public doesn’t know that. There haven’t been many successful films written about poker.”

If Greco can put together the Netflix series that cracks poker, then he may be onto the next big thing on the small screen. Until then, he knows exactly where to go between acting jobs if he wants to reach the exhilaration of another final table in a major tournament. Because that’s the thing about Michael Greco - he's adept at coming alive on the biggest stages.