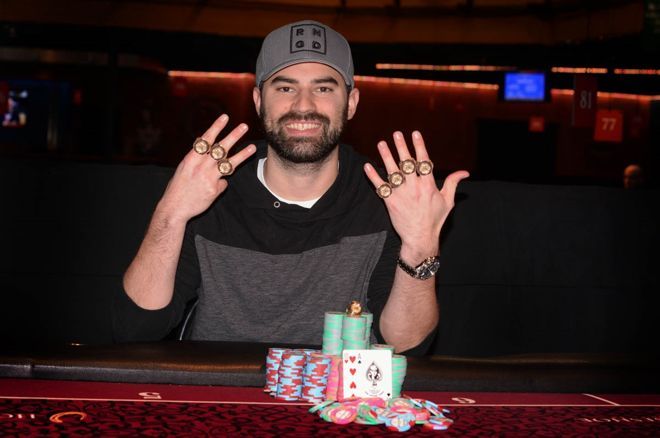 The latest World Series of Poker Circuit (WSOPC) stop wrapped up at Horseshoe Tunica on Monday with the completion of the $1,700 Main Event, a tournament that drew 639 entries and created a $968,085 prize pool.

In the end, it was a familiar face left standing as WSOP bracelet winner Kyle Cartwright claimed the title for $198,451, a 2019 Global Casino Championship seat, and his eighth gold ring. That ties him with Chris Reslock in eighth place on the all-time leaderboard.

It marked Cartwright’s fourth WSOPC Main Event victory and came on the heels of him finishing runner-up out of 293 runners in Event #9: $600 NLH Big Blind Ante, good for $22,381. It also showed that he still knows how to notch a six-figure score on the felt and not just at the video poker machines.

"I've been traveling now for a while, so anytime you get a win, I mean they are so hard to win, these tournaments,” Cartwright told WSOP officials after his win. "This is the first time [my mom] has watched me play live poker. It was great having my family here!"

“That guy heads-up man, he owned me for two days straight I couldn't beat him."

According to live updates from the event, the third and final day of play began with eight players remaining. The first elimination came when Joseph Hebert three-bet jammed holding ace-jack and was snapped off by Darren Martin, who held ace-king. The Big Slick held and Hebert hit the rail in eighth place for $23,389.

Jon Bennett was next to go after getting it in with pocket sevens but failing to win a race against Steve Klein’s king-ten, and Damjan Radanov followed him out the door in sixth place after losing ace-six to Cartwright’s ace-nine.

Martin took his leave in fifth place losing king-queen to Johnny Landreth’s ace-queen, and then Jim Naifeh busted ace-six to Klein’s ace-jack suited. After flopping top pair with a gutshot, Landreth got his stack in against Cartwright, who had middle set. Landreth failed to improve and fell in third place for $90,071.

Cartwright took a near 2:1 chip lead into heads-up play against Klein and it was all determined by a flip. Klein three-bet all in holding the

and was looking to hold against Cartwright’s

turn, but then disaster struck when the

spiked on the river.

“That guy heads-up man, he owned me for two days straight I couldn't beat him,” Cartwright said after the win. “So I thought for sure in the final hand that was a flip, that he for sure would get it, but somehow I came through and won.”

Another player to win a seat to the 2019 Global Casino Championship was Randall Davenport, who won the Casino Champion title after amassing 110 points. Davenport had four cashes and three final tables leading up to Event #13: $250 NLH Double Stack. He wound up finishing runner-up to Randall Hale for $7,690, which was enough to put him over the top.

Davenport barely edged out Carl Masters, who won two rings at the stop and led the race with 105 points. Davenport managed to overtake him thanks to his deep run in the final event. Masters first found success topping a field of 152 entries to win Event #6: $400 PLO for $13,539 and his first ring.

‘’It’s unbelievable. I’m just running hot, playing good, getting good cards, and getting lucky when you need to. I think I’m playing the best I can play,” Masters told WSOP officials. “My opponents were very good. I had to get really lucky against the guy who went out in fourth. I just got a miracle card on the river. I’ve just been blessed all week.’’

Here’s a look at all those who won rings at the Horseshoe Tunica stop.

The next WSOPC stop begins this weekend at Milwaukee’s Potawatomi Hotel & Casino. PokerNews will bring you a recap of the stop’s $1,700 Main Event upon its completion.

Ladies of the WSOP Circuit: Ring Winners First Half of 2018-19 Season