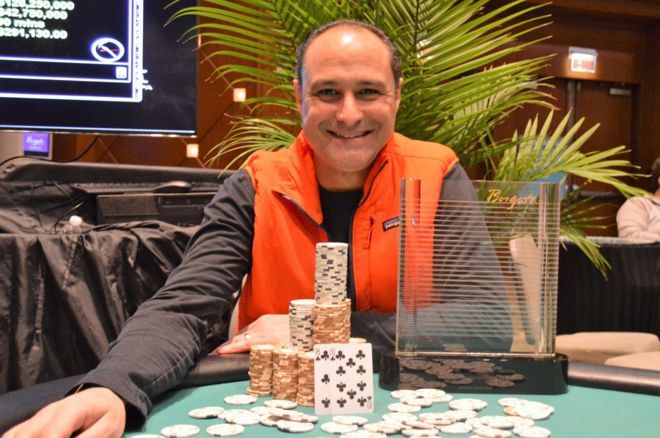 With a monster 5,130 entrants, a $2.7 million prize pool was created. After numerous starting flights and three official days of play, Pascal Zaklama came out on top after a three-way deal, taking the official win despite splitting prize money evenly with another (anonymous) player, along with Vladimir Alexandrov ($216,000).

According to updates from the event, Zaklama got lucky to stay alive with eight players left. That is when he shoved all in holding ace-jack only to run it into the ace-queen of Daniel Cai. Fortunately for Zaklama, the flop contained both an ace and jack, and another jack on the turn secured him the double with a full house.

With four players remaining, Zalkama would finish off Cai. It happened in Level 40 (500K/1M/1M) when Zaklama limped the small blind holding the

and Cai checked his option with the

flop and called when Cai moved all in for around 11 million. Neither the

With three players remaining, the triumvirate opted to strike a deal. Having a slight lead at the time, Zaklama was crowned champ and received $328,695 in prize money. The runner-up, who wished to remain anonymous, got the same amount, while Alexandrov finished in third place.

Prior to the win, Zaklama had just $7,881 in lifetime earnings with a prior career-best of just $2,810 for finishing ninth in a $1,000 no-limit hold’em tournament at the 2007 Mandalay Bay Poker Championships.

Coincidentally, Zaklama hinted at his success back on Day 1 when he bagged a short stack.

“I may not be smiling now but I will be tomorrow,” he said at the time.

Photos courtesy of the Borgata.