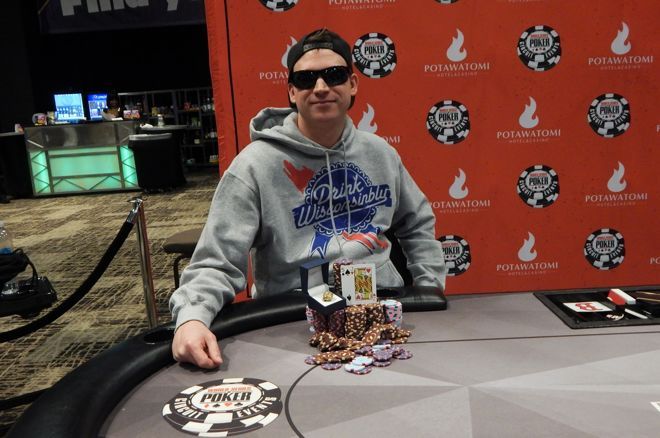 The 2019 World Series of Poker (WSOP) Circuit Potawatomi wrapped up its stop in Milwaukee, Wisconsin on Monday with the conclusion of the stop’s $1,700 No-Limit Hold'em Main Event, a tournament that attracted 667 entrants and generated a $1,010,505 prize pool.

After three days of play, 32-year-old Michael Hudson (pictured above), who had taken a hiatus from the game, came out on top to win the $207,159 top prize, his first gold ring, and a seat into the season-ending Global Casino Championship.

“Yeah, I haven’t really been playing much… came out for the big event. It’s the first tournament I’ve played all series… and just got lucky,” Hudson told WSOP officials after his win. “I just play here and there, I’m sure I’ll play like the Hammond [Circuit], but I’m not going to like grind my life away.”

It actually marked the second-largest score of Hudson’s career after he won the 2007 Doyle Brunson Five Diamond World Poker Classic $5,000 NLH for $490,095.

Hudson began Day 3 with a big chip lead among the final nine and extended it when he scored the first two eliminations. First, he dispatched Eric Wasylenko, a former guest on PokerNews’ LFG Podcast, when his pocket jacks held against Big Slick all in preflop. Cody Brinn followed him out the door in eighth place after running king-queen into Hudson’s ace-king.

At that point Hudson had more than 10 million when everyone else averaged less than two million. Fast forward to four-handed play when WPT champ Kevin "BeL0WaB0Ve" Saul got his stack all in preflop holding jacks against Josh Turner’s ace-queen. It was a flip but Saul wouldn’t win it as the flop delivered Turner two pair.

After Hank Sitton exited in third place – the result of his aces cracked by Hudson’s flopped full house – it came down to Hudson and Turner with the former holding a more than 5:1 chip lead. Turner managed to battle back and briefly take over the chip lead, but Hudson was not to be denied.

and Hudson checked his option with the

. The two proceeded to get it all in on the

flop and Hudson held when the

bricked the turn followed by the

Another player to win a seat into the Global Casino Championship was Ed Veith, who was named the WSOPC Potawatomi Casino Champion. While he didn’t win a ring, Veith did cash four times, all of which were final table appearances. That gave him 102.5 points and the title.

Some of the players who did win rings were father-and-son combo Brett and Josh Reichard, who were featured in this PokerNews article. Likewise, poker pro Aaron Massey bested a 196-entry field to win Event #9: $1,125 NLH Big Blind Ante for $50,957 and his third ring, which he dedicated to the late John Patrick Cibula.

“He lived his life a certain way, which is not the way I have lived a good portion of my career,” said Massey. “People should be more like him and I learned a lot of lessons through this tragedy and hopefully they can stay with me and I can continue to improve as a person.”

He continued: “Just getting back to my roots and to the things, and the people, that actually matter… and not letting all this nonsense and noise of this lifestyle interfere, really was brought back to my attention. I just hope moving forward I can continue to use the values that I was retaught this weekend, being with the [Cibula] family.”

Here’s a look at all those who won rings at the Potawatomi stop:

The next WSOPC stop is already underway at Seminole Casino Coconut Creek. PokerNews will bring you a recap of the stop’s $1,700 Main Event upon its completion.

Hold'em with Holloway, Vol. 97: Big Hands From the WSOP-C Potawatomi