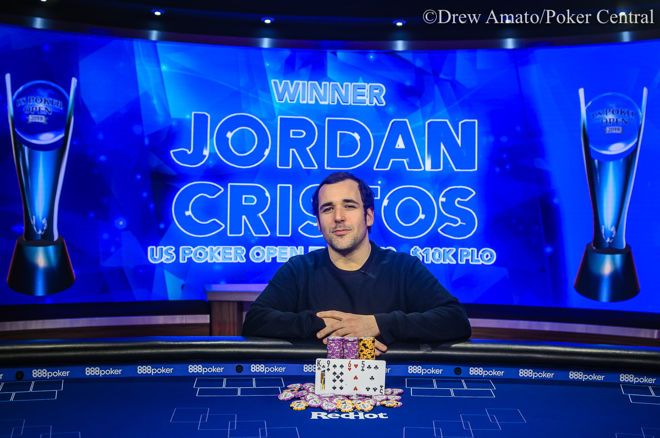 World Poker Tour champ Jordan Cristos began the final table of the 2019 US Poker Open Event #2: $10,000 Pot-Limit Omaha as the chip leader, and despite a back-and-forth heads-up match against German Manig Loeser, he wound up with all the chips.

"It's cool. It's sweet," Cristos told USPO officials after the win. "The structure was turbo-ish and I feel like I didn't out-skill anyone here. There were 50 people in the field and I was probably the 44th best player, honestly. It feels good to come out on top though. I don't think I made many mistakes but I can't really gauge whether or not I did because I'm no PLO expert, but I won so that's good."

He continued: "I want to win the overall championship. If you do good the first two tournaments and you're leading, you might as well finish it out. There's no reason to stop now. It would be awesome to win the U.S. Poker Open. I would love to have the trophy at home to just stare at them every day for a year until it comes back again and be the U.S. Poker Open champion."

Cristos got off to a hot start winning the first two hands and then notching the first elimination a short time later. It happened when Sean Winter, who was fresh off finishing runner-up to Stephen Chidwick in the opening event, and Cristos both had a Broadway straight plus redraw outs. Cristos hit his flush draw to improve and send Winter out in sixth place for $38,400.

Cary Katz, who the year before finished sixth in the same event, then got his chips in on a king-high flop holding aces and was up against Cristos’ bottom two pair. Cristos boated up and Katz was sent packing in fifth place for $51,200.

Immediately after, Adam Hendrix got his short stack all in preflop holding big cards in the small blind and Cristos looked him up with low cards, including a pair of threes, in the big. The latter flopped bottom set and Hendrix had to settle for fourth place and $64,000 in prize money.

Cristos then dispatched an extremely short-stacked Martin Zamani in third place to set up his heads-up match against Loeser. The duo battled for longer than it took to get to heads-up play, and the chip lead changed on four occasions.

Eventually, Cristos flopped a pair with straight and flush draws against Loeser, who had two pair and an inferior flush draw. The chips went in and Cristos turned a bigger two pair. The river was a blank and Loeser, who credits fellow German poker pro Dominik Nitsche with helping him improve his game, fell in second place for $128,000.

PokerNews coverage of the 2019 USPO continues now with live updates from Event #3: $10,000 NLH, which you can follow here.