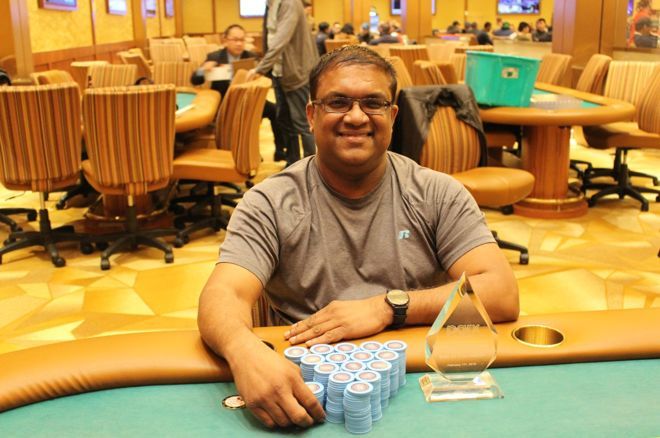 Victor Ramdin has found his way back into a winner's photo after several years of sometimes fruitful, but trophy-less, grinding.

Ramdin's Run to the Final Five

According to the live updates from the event, Ramdin was short with only about 10 big blinds when 12 players remained, but he found ace-king and got it in against the ace-ten of Guoliang Chen to double up.

That enabled him to make it to the final table; however, he still had the shortest stack with eight players remaining after getting unlucky against a flush draw held by Harry McCloskey. Down to about 14 big blinds, Ramdin shoved all in with

over an open and got called by Michael Marks, who held

behind him. Luckily for Ramdin, he paired up on the river after flopping an open-ended straight draw to double back up.

Ramdin would then find another double with ace-king over ace-six on an ace-high flop.

Play continued with Matt Gross and McCloskey being eliminated, and then Ramdin got lucky once more. This time, his king-jack prevailed against Bryan Neira's ace-king to reduce the field to five.

The remaining players finished out the level and then decided to discuss a deal. In the end, they came to an agreement that saw Jeffrey Colpitts and Moshe Zarum walk with a little over $50,000, while Marks got $62,994, Chen $78,716 and Ramdin the lion's share of $87,327.