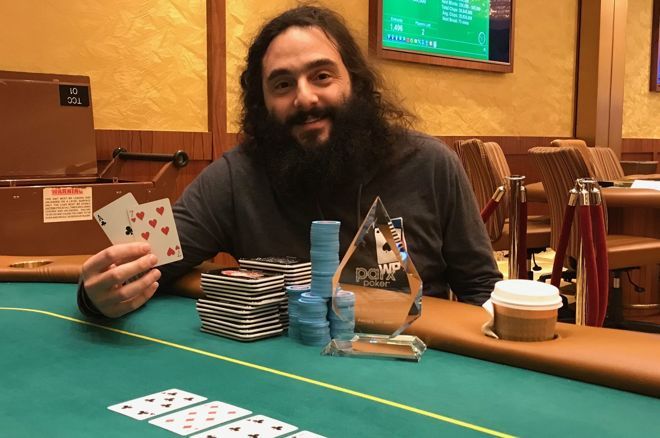 The heads-up match for the Parx Big Stax 500 Championship, a tournament that attracted 1,496 entrants, began with Joel Deutsch facing a 52-million to seven-million chip deficit against Kenny Huynh. It ended, after a 19-hour day, with Deutsch coming out on top after a heads-up battle for the ages.

Deutsch rode the rollercoaster and staved off elimination multiple times over a two-hour match, scoring a $126,995 payday at the end of a grueling final day at Parx Casino in Bensalem, Pennsylvania.

Deustch was short stacked for most of three-handed play and beyond, but came away with the biggest score of his career.

Deutsch, Huynh (2nd - $80,298), and Bosu Avunoori (3rd - $52,300) were the final three, with Huynh and Avunoori holding most of the chips. In a span of one big hand, followed by another final duel between Huynh and Avunoori, and heads-up play was set.

"I had nothing to lose," said Deutsch of the heads-up battle. "I'm thinking one thing; I've got second place. I didn't picture this."

Deutsch chipped away at the lead and won a couple of big pots, at one point he avoided elimination with jack-ten offsuit in a preflop all in against Huynh's ace-jack.

"It kept getting better from there," said Deutsch. "I really got some momentum going."

Long Grind to the Final Table

Day 3 started with 42 players, and it took nearly 11 hours to reach the nine-handed final table. Coming back from dinner break, 14 players remained, and it took another hour after that for the next elimination, with David Clarke going out in 14th place ($6,182).

Two more eliminations happened within the following hour, but after that, the tournament remained an 11-player affair for another two-plus hours.

The floodgates broke in Level 31, however, with Adam Pepper (11th -$7,888) and Joey Deforca (10th- $7,888) going out within minutes of each other, sending the remaining nine players to the final table.

Jeffrey Giordano was next to go, taking eighth place after suffering a knockout at the hands of Avunoori.

Things started to get wild at the final table after that, with William Corvino (7th - $16,557) and Sumeet Wayachal (6th - $21,53) both knocked out in the same hand by Avunoori. The trio got into a three-way preflop all in with Avunoori’s pocket kings holding up to eliminate both opponents.

Shortly after that, Michael Wolf (5th - $28,637) found himself on the wrong end of a set-over-set cooler, losing his stack to Huynh when Wolf’s eights full were bested by Huynh’s queens full.

Four-handed play continued to involve big pots, including a massive pot won by Deutsch in a hand that began with Deutsch limping in from the cutoff, and eventually taking down a nearly 10-million chip pot at Michael Michnik’s expense. Michnik went out a few hands later.

That concludes our coverage of the Big Stax 500 event, but the Parx Big Stax XXXII continues this weekend with the Big Stax 1100 tournament, which we'll also live report.

Slot Tips: the Best Way to Win at Slots