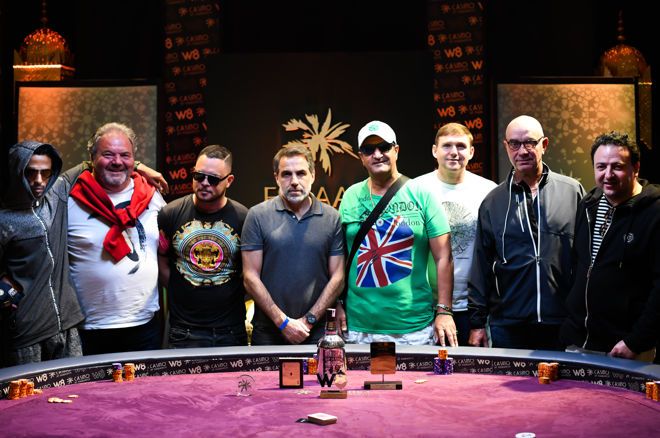 Heads-up, Ali Alawadhi defeated Thierry Morel to claim the first-place and MAD 331,000 (€30,529) while Morel secured himself a payday of MAD 251,000 (€23,150) after the three last players agreed to a deal before battling for the trophy and earning a bottle of Chivas each.

Alawadhi, an American player from Florida with $637,000 total live earnings, beat a field of 101 entries and earned the fourth victory of his career. French-speaking commentators jokingly told Morel would finish second once again after being the runner-up in several tournaments, and that was exactly what happened.

The most expensive tournament of the 10-day festival at the Casino de Marrakech saw more players enter after the start of Day 2 to boost the field to 101 entries, including 34 re-entries, and create a prize pool of MAD 1,318,000 (approximately €121,577). Only the top eleven spots were guaranteed a return on their investment, and the result of the final table can be found below:

Hassan Fares was the chip leader at the beginning of the day, with 315,000 in chips, but ended up bubbling the tournament. He was eliminated by Pierre Zerbib. Anas Tadini was among the players to rebuy in the event; he fired six bullets of the total of 34 reentries. He wasn't able to parlay those efforts into a cash.

The list of the unfortunate players not reaching the money included Bernard Guigon and Marius Conan and other notables such as Andrew John Leathem, Mathieu Papineau, Achille Voltolina, and Julien Ferey.

After the bubble burst, Mateo was the first player to reach the money in eleventh place for 30,500 MAD (€2,812), quickly followed by young French pro Corentin Ropert for the same prize. Ropert moved his last 260,000 in the middle with queen-ten off and got eliminated by Thierry Morel with ace-five on a dry board.

Hassan Nashar ended up in the ninth place, losing a flip against Alawadhi and bubbling the official final table. Mark Rostron, was amongst the biggest stacks of the field for some time but finished in seventh place due to a massive hand losing with top-pair and a flush draw against the turned flush of eventual runner-up Morel.

After the elimination of Pierre Zerbib in fourth place, the three remaining players agreed to a deal that left the winner's trophy and MAD 60,000 up for grabs.

In just a few hours, the cards will be back in the air in the poker room of the Casino de Marrakech as the only starting day of the Wonder8 MAD 8,800 (€800) Main Event kicks off at 1 pm. The PokerNews live reporting team will provide updates until a winner is crowned on Sunday, March 31th, 2019.