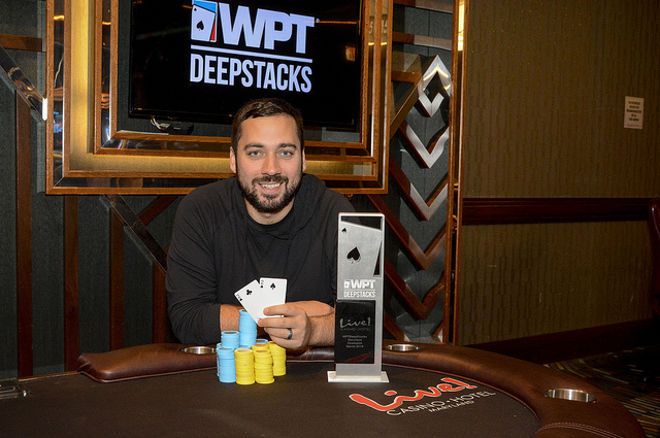 The WPTDeepstacks just wrapped its latest stop at Maryland Live! and it was local pro and 2015 bracelet winner Justin Liberto who claimed the victory. The final day was short and sweet, and Liberto was especially happy to lock up the win near his hometown of Baltimore.

As he told WPT reporters, he hovered between 3.5 and 12 big blinds for the better part of Day 2, but he didn’t give up. He squeaked into the money that day with 3.5 big blinds and rode the short stack for some time before spinning it up to finish the day as the chip leader with 38 big blinds.

That made for a shallow final table, but Liberto would have had it no other way.

“I knew it was going to be super shallow and super quick. I like that. I like playing these $1,500s that don’t take a week, so it’s nice to get in here and not be here for 14-hour days for six days.”

Liberto does well on his home turf — he took fourth in this same event two years ago and was happy to improve upon that finish. The win is also a continuation of a strong start to 2019 as he notched six cashes at the Aussie Millions including a win in the A$1,200 Shot Clock Shootout and a runner-up finish in the A$5,000 No-Limit Hold’em Six-Max.

*Includes a $3,000 package for the season-ending WPTDS Championship

As Liberto mentioned, the final table was a shallow one, the nine remaining chip stacks spread between 11 and 38 big blinds. The story of the final table consisted mostly of the best hands holding up in all-in pots, with either Liberto or eventual runner-up Noah Shefrin on the winning side.

A short-stacked Jon Cantor ran pocket nines into Shefrin’s kings to drop first, and Matt Vaughan followed suit, getting pocket sevens in against Shefrin’s superior pocket eights and failing to catch up.

Then it was Liberto’s time to run up. Liberto flopped a set of twos against Feng Li who held ace-queen high, and a queen on the turn spelled trouble for Li. He called bets on the flop and turn and called off the rest when the board paired with a seven on the river.

Shefrin claimed another casualty when he woke up with queens in the small blind and shoved on Johnathon Gilliam, who called with king-deuce suited in the big blind but didn’t improve. Liberto and Shefrin were pulling away from the pack by this time, and the elimination of Asaf Ben-Shushan in two hands got it down to four-handed.

Liberto went back to work, sending Ryan Tamanini out with ace-jack versus queen-ten suited. Tamanini went runner-runner two pair but the board four-flushed with the suit to match Liberto’s ace and the rungood continued.

Down to three, Chris Csik three-bet shoved with ace-two but Liberto was best again with ace-king and turned Csik dead with Broadway.

Liberto started heads-up with a nearly 2-1 chip advantage and got Shefrin on the ropes straight away when he turned top pair and rivered a flush with king-deuce suited. A lot of chips went into the pot as Liberto called a check-raise on the turn and got his big bet called on the river.

That brought Liberto into a 9-1 lead and it would end with a flip. Shefrin needed help with ace-eight against Liberto’s pair of deuces, but the board ran out clean and another two fell on the river to put an exclamation point on Liberto’s victory.

On top of adding a WPTDS title to his resume, Liberto also collected $116,363 for his fifth six-figure score, which includes a $3,000 package for the season-ending WPTDeepStacks Championship event. You can watch Liberto's winner below interview courtesy of WPT.

Images and video courtesy of WPT.