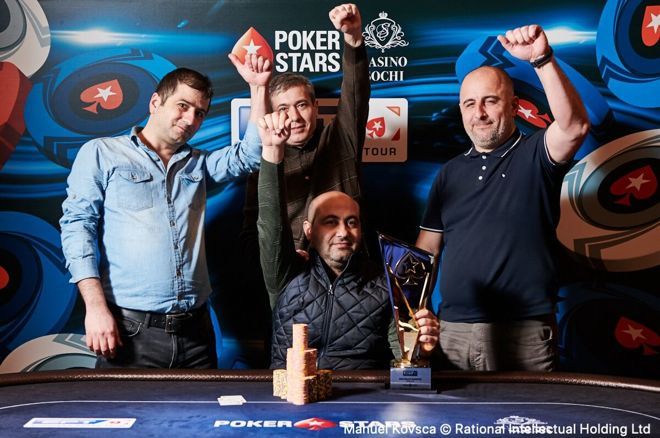 Rushad Iskandarov, an experienced online poker player of four years, has taken down the 2019 EPT Sochi High Roller and Iskandarov achieved several firsts in doing so. This is his first title and he managed to do it the first time he has sat down to play a live tournament. Not only that but he is the first Azerbaijani to win an EPT event.

Interestingly, Iskandarov found himself heads up with Elvin Sarkarov, who is also from Azerbaijan. With two players left, history had already been made. Speaking to the winner after the dust had settled, the father of two explained that he plays poker online regularly but doesn’t usually have time to play live. He made this trip with some of his oldest friends and they wanted to combine a holiday with playing poker.

“To be honest it was very, very stressful! It was challenging to be playing against such good players," the champion added.

Out of the 84 hopefuls who took part, nine finalists were still in contention at the start of the third and final day. There was a slew of eliminations early, with Daniil Kiselev busting on the very first hand of the final. Less than 15 minutes later, Irshat Shaykhov joined Kiselev on the sidelines. He had a bad run, losing ace-queen to Sergey Kolyasnikov’s queen-jack suited after Kolyasnikov raise-called his all in preflop. This left Shaykov short and he was gone just a few hands later.

Ramon Colillas was out next, finishing in seventh after losing a flip with ace-ten to Elvin Sarkarov, who was holding pocket-fours. Colillas couldn’t recover after a four landed on the flop and the Team PokerStars Pro and PSPC winner receives ₽1,368,500 ($21,036) for another deep run this year.

With six left, things slowed down in terms of eliminations and it wasn’t until after the first break that Day 1 chip leader Kolyasnikov was eliminated. Kolyasnikov had certainly made his presence known as one of the most active at the table, but had gotten fairly short by the time he moved all in from under the gun with king-ten. Sarkarov isolated all in over the top with ace-jack suited in late position before Iskandarov’s looked down to see pocket kings in the hole. The kings held up and the huge all in was certainly one of the defining moments in Iskandarov's tournament to put him joint top of the chip counts for the first time.

Next to fall was Valery Yantsevich who made it as far as fifth, followed by Pete Chen in fourth. The most experienced player in the running at this point had battled hard throughout the final and the majority of hands he had won were taken down without showdown. It all came down to a flip in the end, with Chen’s losing to Sarkarov with pocket fours to ace-queen. He added another ₽2,807,000 ($43,148) to his already impressive live tournament results.

That left three and again, the onlookers didn’t have to wait long before another all in meant the end of Maksim Bukreev’s hopes. Iskandarov went all in on the button and Bukreev woke up with ace-queen in the small blind. The shortest stack at this point, he quickly got it in and had the best of it with Iskandarov turning over queen-ten. However, Iskandarov hit broadway by the river and Bukreev's run ended in third place. He took home ₽3,650,500 ($56,112), which is his biggest score to date.

After a brief recess, Iskandarov and Sarkarov sat down for what turned out to be an epic heads up battle. Over three hours and fifteen minutes, the chip lead swung back and forth with both challengers vying hard for the win. In the end though, Sarkarov was eliminated after bluffing all in on the river on a paired board and running into Iskandarov’s trip fives. It was a great effort from the chip leader coming into the final table and he took home ₽5,579,000 ($85,755) for finishing as runner-up.

That concludes nine days of PokerNews coverage from the EPT in Sochi. On April 25, the European Poker Tour will set up shop in Monte Carlo. PokerNews will be on the ground to bring ten days of continuous live coverage. Check the Live Reporting section for continued coverage of poker tournaments around the world.