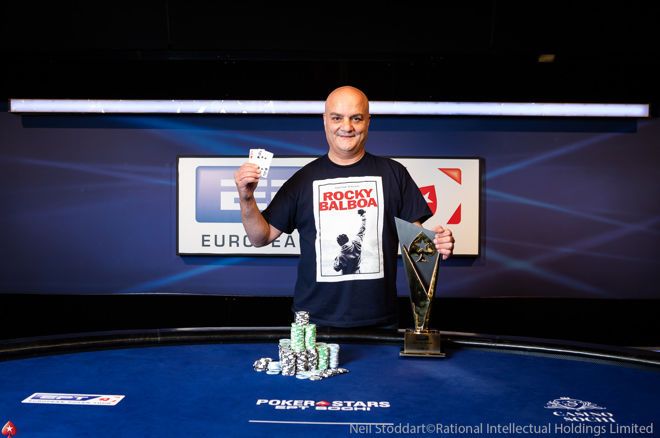 Gilboa has now become the first-ever Israeli EPT champion and at 61 years of age, the consensus here at Casino Sochi is that he is the oldest EPT champion ever as well.

Wearing a t-shirt form the 'Rocky' film franchise throughout the later stages of the poker tournament, his friends told him not to change his t-shirt for luck.

It must have worked because Gilboa now adds over $400,000 to his career earnings.

"I'm glad that I'm the first Israeli winner," Gilboa told PokerStars' Joe Stapleton shortly after his victory. "You have to know that the standard of Israeli poker is becoming tremendous. We've had a lot of achievements at the WSOP and at other European tournaments. I know I'm the first, but for sure I'm not the last."

"Never give up. You can start, you can study and it's an amazing game. I love it."

An experienced bridge player, Gilboa first started playing poker eight years ago and says that playing bridge on the national scene helped him a lot.

"I'm self-taught. I love to learn and I'm improving all the time. I learn from my mistakes, from others and from other very good young Israeli players."

"Never give up. You can start, you can study and it's an amazing game. I love it."

Six players returned to Casino Sochi on Friday, March 29 to play down to a winner and try to become an EPT champion. Eventual runner-up Zakhar Babaev started the day with a commanding chip lead ahead of the other five players. Gilboa came into the day in the middle of the pack and benefited from two major missteps from opponents.

The first came from Vyacheslav Mizun who shoved with ace-high into the pocket jacks of the Israeli player. Jacks held and Gilboa was up into second place in the chip counts. Shortly after, it was Serafim Kovalevsky who became the first elimination of the day. He ran pocket sixes into the pocket eights of Babaev to bust in sixth who now sat with more than half the chips in play.

Babaev could have been forgiven for sitting back and letting the other players fight it out, but instead, he turned it up a notch, running an audacious bluff with seven-deuce against Ivan Ruban to move even further ahead.

However, what goes up must come down and the second of Gilboa's pivotal hands was to come against Babaev. Babaev held ace-five and after check-calling on flop and turn, where he had the nut flush draw, he check-jammed on a blank river. Gilboa snap-called with queens allowing him to close the gap. On the very next hand, Babaev's formerly monster chip lead was gone with the two Israeli players level in chips.

Maksim Pisarenko and Mizun both doubled either side of the break, with Babaev managing to eke out a chip lead once more, but Gilboa once again closed the gap with the elimination of the plucky Mizun who doubled five times today alone. Mizun had flopped a set but Gilboa turned a flush draw to send him to the rail.

Both Gilboa and Babaev continued to slug it out, trading pots as the chip lead swung between the two of them before Ruban was eliminated in fourth place. He lost a classic race with queens against Babaev's ace-king after the latter flopped an ace.

By this stage, Pisarenko was slipping, keeping himself in contention with a series of shoves. But he never looked like breaking the Israeli duopoly at the top of the chip counts and was eliminated by Gilboa when shoving his last six big blinds.

From the day's play so far, this was the heads-up battle most neutrals would have been hoping for and it didn't disappoint. Babaev appeared to only have one gear and kept the foot firmly on the gas. Gilboa kept him firmly at bay before the first all-in confrontation.

Babaev had flopped top pair against Gilboa's flush draw, and Babaev couldn't look as the turn and river bricked and he doubled into the lead.

After coming into heads-up play as the chip leader, some players may have rolled over under the pressure of Babaev, but credit to Gilboa he stayed in it even as the chip lead continue to switch between the two of them.

But just over 30 hands into heads-up play, and as the contest looked to draw on, it all came to a crashing halt with Babaev three-betting all in for 92 big blinds with ace-nine only for Gilboa to have opened with ace-king.

Gilboa held and on the very next hand cleaned up the final six big blinds of his compatriot to eliminate him and seal the victory just before 8 p.m. local time.

In his victory interview, Gilboa says that he was spurred on by a particular Rocky quote that stuck with him over the course of the tournament.

That concludes nine days of PokerNews coverage from the EPT in Sochi. On April 25, the European Poker Tour will set up shop in Monte Carlo. PokerNews will be on the ground to bring ten days of continuous live coverage. Check the Live Reporting section for continued coverage of poker tournaments around the world.