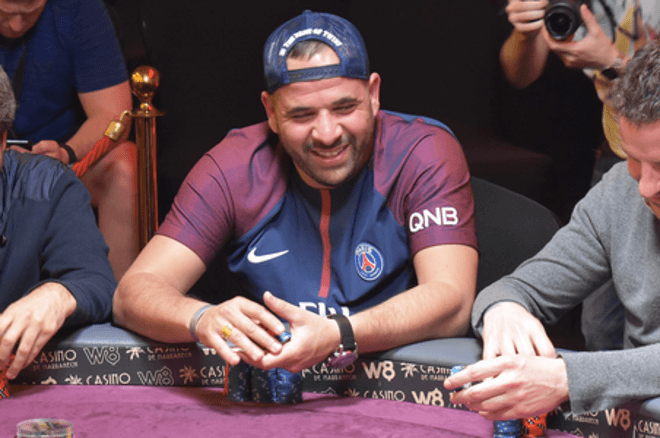 Day 2 of the Marrakech Wonder8 Main Event kicked off on Saturday with 64 players returning in Casino de Marrakech. Twelve hours later, just nine players remain all with their eyes on the MAD 330,000 top prize (€30,421). Youssef Aananouche (lead photo) leads the field after putting 2,070,000 in the bag.

GRJ (Juan Galan), chip leader at the beginning of the day, managed to stay on top of the counts most of the day to reach the final 9 players, while Aananouche made a noticeable entry among the big stacks after a huge set up against Alexandre De Zutter with full house versus full house.

Local players Anas Tadini, second in chips with 2,050,000, and Najib Bennis with 655,000 look for a hometown crowd at the final table. Tadini is a regular of the Casino and with $698,446 total live earning, represents a difficult opponent on the way to the title. Tadini's biggest score was in the FPS Mazagan Main Event in 2011 for $105,954. Bennis, who so far has only cashed in tournaments in Morroco, will try to catch his third title.

The unfortunate Karim Lehoussine became the bubble with pocket aces cracked by Emile Carette holding jack-ten suited. He left the tournament with a smile, and many eliminations followed quickly.

Cards hit the air at 3 pm on Sunday and will feature a live stream on the Wonder8 Youtube channel. There will be a 30-minute delay, and you can also follow live updates here on until a new Wonder8 Champion is crowned on PokerNews.