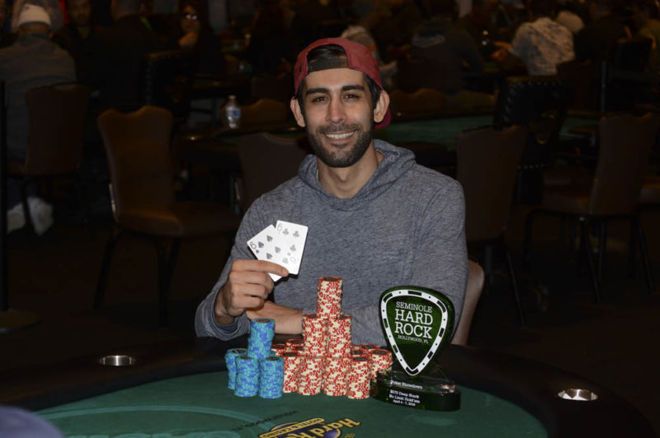 Nick Ahmadi was no stranger to SHRPO events with a half dozen final table appearances under his belt. However, it wasn’t until the 2019 Seminole Hard Rock Poker Showdown opener that he’d finally break through to claim the title and a $209,977 first-place prize after a heads-up deal with Robert Pollmeier.

According to updates from the event, Irish pro Gavin O’Rourke was the first to fall after getting his chips in with jack-ten suited and failing to get there against Pollmeier’s Big Slick. Not long after, Habib Jahangard exited in ninth place when his two pair got counterfeited by chip leader Jeff Kessler.

Kessler then won a flip holding pocket tens against ace-jack suited to dispatch Arkadiy Tsinis in eight place, while Ahmadi used king-queen to eliminate Mohammed Tarkmani, who had queen-ten, in seventh place.

Ryan McKnight bowed out in sixth place after getting it in with aces preflop only to have Nathan Lee flop two pair holding jack-ten. Lee followed him out the door in fifth place though after making two pair kings and queens only to see Kessler roll over trip kings.

Kessler then got lucky with pocket sixes to crack pocket tens and eliminate Allan Bieler in fourth place for $91,328. With three players remaining, Kessler had 70 percent of the chips in play. However, the cards turned against him and he doubled up his two opponents before falling himself in third place.

It happened when Kessler raised holding ace-deuce in the small blind and called off when Ahmadi, who had two black sixes, three-bet from the big. The pocket pair held and Kessler hit the rail in third place for $108,780. At that point, Ahmadi and Pollmeier worked their heads-up deal.

While the opening event was by far the biggest of the Seminole Hard Rock Poker Showdown thus far, there have been plenty of side events awarding trophies. In Event #8: $360 PLO8, a tournament that drew 102 entries and created a $30,600 prize pool, David Prociak came out on top to win $9,331 and his sixth Seminole Hard Rock title (fourth in a PLO variant).

The first came at the 2016 Seminole Hard Rock Poker Open, the next two at the 2017 Lucky Hearts Poker Open, and the final after winning a WSOP Circuit ring at the property in 2017.

“I think I do a good job at just managing my luck,” Prociak told tournament officials after his win. “I get good stacks, and then I can afford to gamble in some hands, and a lot of people are afraid to play back at you when they know you’re going to play the pot all the way to the river a lot of times. I think I built up a little bit of a reputation for not being easy to bluff or let go of hands.”

Here’s a look at those who have captured titles at the series thus far: