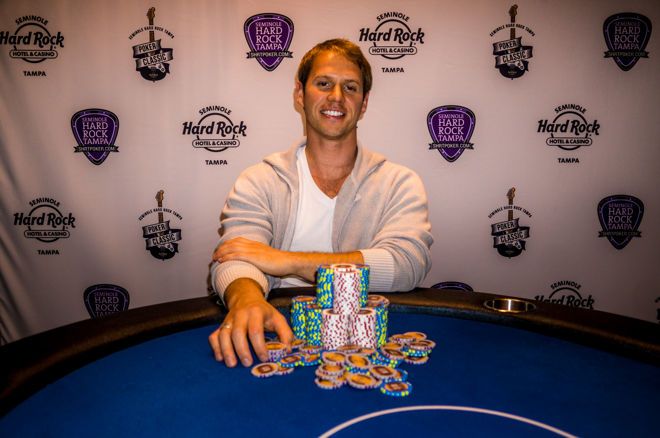 “It’s humbling,” Leecy told tournament officials after his win. “Poker is a game where we tend to think we’re doing everything perfect when it’s going well and everything’s just against us when it’s going bad.”

He continued: “I struggle with pride like the next guy or gal … I feel blessed and thankful that it ran this way. Obviously, I was on the good end of a lot of big hands all day.”

In addition to playing poker, Leecy is heavily involved in his church and ministry. He graduated from Trinity College in Florida last May and was a part of their National Championship winning basketball team. While poker is treating him well, he has plans of applying for seminary or graduate school.

It marked the second-biggest score of Leecy’s career after he finished runner-up to David Bradshaw in the 2016 Winter Poker Open $1,650 Championship Event for $120,000. In October of last year, he also won a recurring $475 Saturday NLH $100K GTD tournament at Hardrock Tampa for $28,736.

According to updates from the Main Event, Leecy won a big pot off Justin Zaki after turning an ace-high flush. Zaki was left with crumbs and fell a short time later jamming with queen-ten and failing to get there against Leecy’s Big Slick. Zaki took home $13,944 for his eighth-place finish.

With five players remaining, Jeff Trudeau Jr got his stack all in preflop holding ace-ten only to run it smack dab into Leecy’s ace-queen. The superior ace held and Trudeau Jr was ousted in fifth place for $23,979.

After Ken O’Donnell bowed out in third place – the result of his ace-six failing to get there against Leecy’s ace-ten – it set up a heads-up match between Leecy and Andrew Boccia with the former holding a near 4:1 chip lead.

. Unfortunately for him, he was dominated as Leecy had flopped trips with the

While Boccia fell one spot shy of winning the Main Event, he did manage to win a title during the inaugural Hard Rock Tampa Poker Classic. In late February, he topped a 1,128-entry field to win Event #1: $360 NLH Re-Entry for $46,255 after a five-way deal. Additionally, he got a $1,650 seat into the Main Event, which he obviously put to good use.

Speaking of the Main Event, it was just one of ten tournaments in the inaugural Seminole Hard Rock Tampa Poker Classic. Event #10: $150 Big Stack NLH will conclude on Wednesday. Here’s a look at all those who won titles in Tampa: