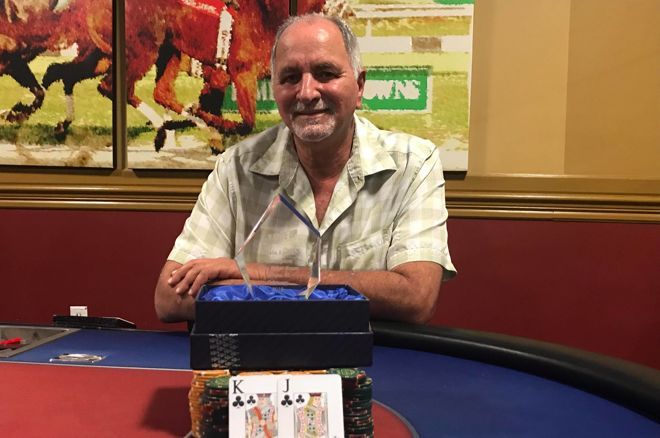 The 2019 Ante Up Poker Tour Tampa Bay Downs $250 Main Event attracted 443 entries over five starting flights – which surpassed the $60K GTD by creating an $89,503 prize pool – and on Sunday, 60-year-old Larry Negron, a regular at Tampa Bay Downs, was named champion after a three-way deal with Bill Melms and Landon Brown.

As the winner of Main Event, Negron, who won his way in via a $65 satellite investment, won $14,070 and will appear on the cover of Ante Up Magazine’s March issue. For finishing runner-up, Melms was awarded $13,958 while Landon Brown finished third for $12,990 plus a $1,650 prize package to the 2019 Ante Up World Championship Main Event.

Negron took up the game 10 years ago after he saw it on television and had his son teach him the rules at the kitchen table.

Day 2 saw 79 players return to action but with only 45 of them slated to get paid 34 of them would leave empty handed including Brian Torok, Steve Rauchut, and James Wood, just to name a few.

Neil Lawson was the first to fall from the final table after his ace-jack lost to Donald "Doc" Brown’s ace-seven, a result of a seven appearing on the flop. Day 1b chip leader Hyndi Khomutetsky followed him out the door in ninth after losing an all-in preflop flip holding tens against Joao Figueiredo’s ace-king, and then Donnie Kidman lost a race of his own pocket jacks to Brown’s ace-queen suited.

Troy Bercot busted out in sixth when he shoved a flop with bottom pair only to have Melms check-call with top pair. Bercot failed to get lucky and had to settle for $3,810 in prize money.

Doc Brown, the Day 1c chip leader, fell after getting it in with king-jack against Melms’ ace-jack, and Figueiredo bowed out in fourth place after dwindling down and shoving with queen-three, which did not improve against Landon Brown’s ace-ten.

Not long after the final three players struck the deal that would end the tournament. To solidify it, Brown agreed to throw $500 to each of his opponents for the Ante Up package.

The next Ante Up Poker Tour Main Event, which will also be live reported by PokerNews, will be the Ante Up Spring Poker Classic at Vee Quiva in Laveen, Arizona from March 23-31.