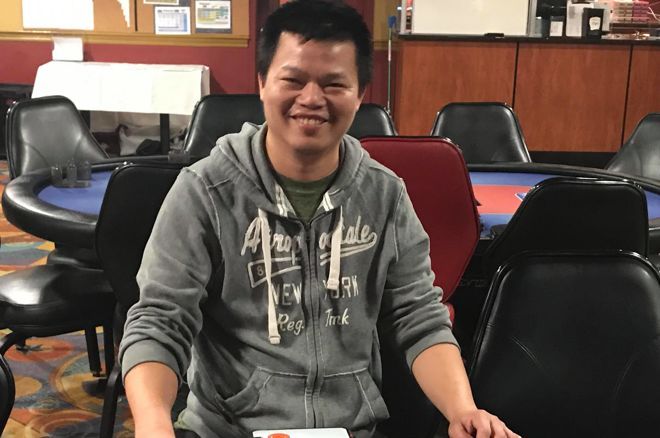 Day 1A of the 2019 Ante Up Poker Tour Tampa Bay Downs $250 Main Event attracted 89 entrants to the first of five starting flights. After 14 levels of play, each 30-minutes in duration, just 18 remained with Peter Chang and his stack of 296,500 leading the pack.

Chang came on strong in the penultimate level of the night. That is when a player moved all in for 33,900 from the cutoff and Wang called from the button. Both blinds folded and the hands were turned up.

was run out on the river.

One level later, Wang vaulted into the chip lead after winning a big pot with pocket queens against kings thanks to a third lady on the flop.

Another player to bag was Anthony Astarita, who in 2016 topped a 538-entry field to win the WPTDeepStacks Tampa for $131,041. While he has dozens of cashes on HendonMob, his only other one over four figures came in 2016 when he finished fourth in the Fall DeepStack Poker Series Tampa Event #5: $570 NLH Deepstack for $18,090. Astarita bagged 190,500 and is looking to add another first-place finish to his list of accomplishments.

Among those to play and fall on 1A were Allen Wiseman, Bobby Dugan, James Wood, Anthony Dianaty, Shawn Barnett, and Primo Costa. The good news is that they, along with any newcomers, can jump in any of the four remaining flights.

On Friday, two more flights will take place starting with 1B at 1 p.m. local time. The 1C flight will follow at 6 p.m., and then the final two flights will kick off at the same times on Saturday. The surviving players from each flight will then return at 1 p.m. on Sunday to play down to a winner.