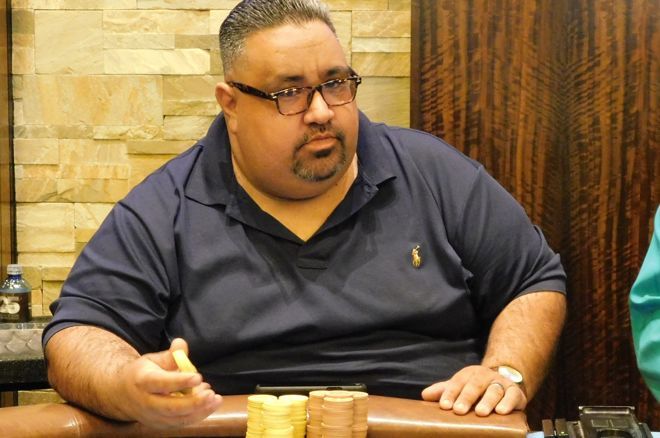 On Saturday, two more flights played out in the 2019 Ante Up Poker Tour Spring Poker Classic $360 Main Event. Day 1c attracted 86 runners, while the 1d flight had 85 runners to bring the total field up to 319 entries. That created a prize pool worth $95,700 and surpassed the $75,000 guarantee.

Basketball star Earl Barron still holds the overall chip lead going into Day 2 of the Main Event. He is the only player with a stack above the half-a-million mark.

Sedillo started building early in the day, winning pot after pot, a little at a time. He was followed by Eric O’Connell with 223,000. O’Connell managed to get most of his chips at the end of the day. His streak started when he moved all in with trips and got called by Daniel Breeze to double up.

As for Sicaeros, he started chipping up during the last levels of Day 1d. He won multiple races to take over the chip lead of his flight.

Also doing well in the 1d flight was Andrew Conway, who in the penultimate level of the night saw a player in middle position move all in for 45,000. Conway, in late position, reshoved for about 195,000 holding pocket kings and was way out in front of his opponent’s

and Conway took down a nice pot late in the evening.

Some of the players who fired on Saturday but weren't lucky enough to make it through were Sambuddha Gosh, Ramon Estrada, Mike Kiernan, and Cary Christensen.

On Sunday, 49 competitors will return to the tournament area at 11 a.m. local time to battle it out until a winner is crowned.

The PokerNews live reporting team will be at the Ante Up Poker Tour Spring Poker Classic at Vee Quiva in Arizona to provide coverage of the $360 Main Event all weekend long. Click here to follow the action in the live blog.