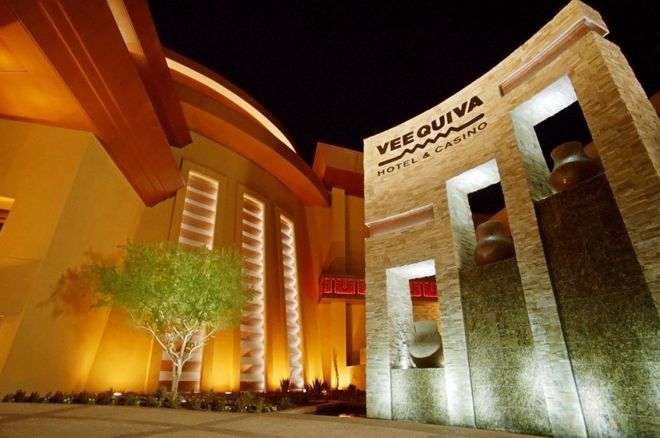 For just the second time ever, PokerNews will be capturing the action from the Ante Up Poker Tour. The Ante Up Spring Poker Classic kicked off earlier this week at the Gila River Hotel & Casino Vee Quiva just outside Phoenix, Arizona.

The 10-event series will culminate this weekend with a $75,000 GTD four-flight $360 Main Event, which will be live reported right here on PokerNews. The winner of the Main Event will appear on the cover of the March 2019 issue of Ante Up Magazine and will receive a seat in the 2019 Ante Up World Championship Main Event.

The stop kicked off with Alexis Flores topping an 85-entry field to win Event #1: $230 NLH Kickoff for $3,013 after a four-way deal. Meanwhile, Event #2: $160 Women's Championship attracted 45 runners and saw Rebecca Wooten of Mesa, Arizona prevail to win the title and $1,755 after a heads-up deal with Marsha Wolak.

In Event #3: $130 HORSE Championship, John Regan topped a 47-entry field after a heads-up deal with Ronnie Guy that saw him win the title and $1,528 in prize money. Other side events will play out this week before the Main Event gets underway on Friday.

"Tournament poker, including non-hold’em events, is vital to the success of any poker series."

“Last year’s collaborative event with Ante Up, held at Vee Quiva, was a huge success,” said Zach Lansing, poker room manager at Vee Quiva. “Here at Gila River, we are always looking to kick things up a notch and create bigger and better events for our guests, so expanding the Ante Up Spring Poker Classic into a full-blown series was the next logical step.”

Lansing continued: “Tournament poker, including non-hold’em events, is vital to the success of any poker series. Gila River is always looking to expand its horizons in the poker industry, which is why we are so excited to introduce a new and innovative approach to team poker. Our goal as a premiere gaming enterprise is to appeal to a wide variety of poker players, all while giving those players the opportunity to expand their skills and showcase their talent.”

Ante Up Poker Tour was founded by Scott Long and Chris Cosenza, the publishers of Ante Up Magazine and hosts of the PokerCast, an award-winning weekly Internet audio show that dates back to 2007.

For more information on the Ante Up Poker Tour, visit anteupmagazine.com.