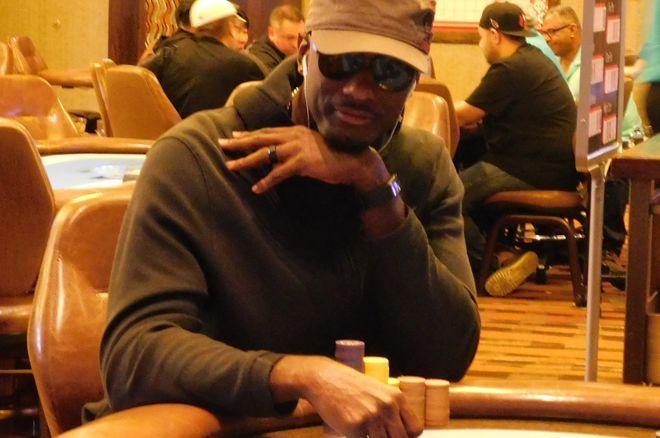 A field of 70 players on Day 1B of the 2019 Ante Up Poker Tour Spring Poker Classic $360 Main Event was whittled down to just 11 players after 13 levels of play.

Day 1ab of the 2019 Ante Up Poker Tour Spring Poker Classic $360 Main Event is in the books. Flight A attracted 77 runners while the Flight B drew 70 more to bring the total field up to 147 entries with two more flights scheduled for Saturday.

On 1a, which was comprised of 13 levels of play, only 12 players remained with Joe Villhauer and his stack of 461,000 leading the way. Villhauer was responsible for the elimination of multiple players throughout the day, including the last elimination. He found aces in a blind-versus-blind situation to eliminate Bill Harvey. Villhauer is followed by Steven Howard (226,000). James Propes rounds up the top three with 217,000.

Meanwhile, 1b saw the emergence of basketball star Earl Barron, who put 535,000 in the bag. The battle for the chip lead was a close one during most of the day between Barron and Mantas Stikelis. However, Barron managed to take down a couple of more significant pots at the end of the day to take the lead, as well as the overall chip lead of the first two flights. Mantas Stikelis (312,000) and Mikal Smith (266,000) are the only two other stacks above the 200,000 mark for the second flight.

The good news is they’ll be able to try again on Saturday if they wish as Flights 1c and 1d will play out.

The PokerNews live reporting team will be at the Ante Up Poker Tour Spring Poker Classic at Vee Quiva in Arizona to provide coverage of the $360 Main Event all weekend long. Click here to follow the action in the live blog.