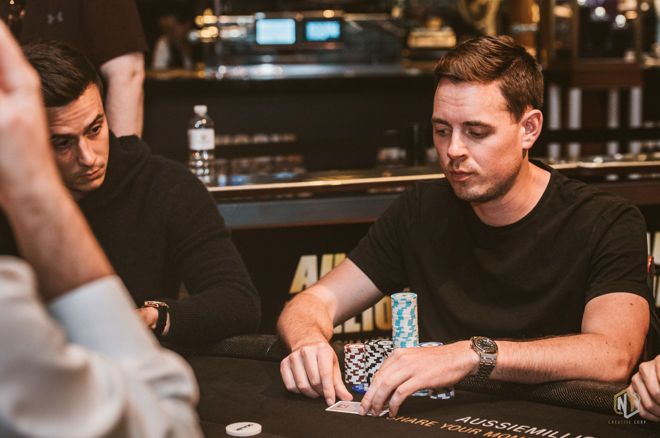 After nearly 13 levels of tournament poker, the Event #12: AU$50,000 Challenge concluded with just five players remaining from yet another record-setting field here at the 2019 Aussie Millions

Following a shortened Day 1 that saw 23 players survive from the 37 entrants, an immediate influx of returning players and new entrants started Day 2 as the tournament swelled to a final number of 62 entrants. International tournament veterans such as Chino Rheem, Bryn Kenney, Mustapha Kanit, Alex Foxen, Jack Salter, Kristen Bicknell, Cary Katz, and Maria Ho were a handful of the names in the field alongside local players Kahle Burns, Rory Young, Sam Higgs, and Luke Martinelli.

Unfortunately, those players all found themselves on the rail throughout the day as just five players would bag chips and enter the unscheduled Day 3 on Tuesday, January 29 at 2 p.m. (AEDT).

Defending Aussie Millions Champion Toby Lewis is the current chip leader with 1,040,000 fresh off his second-place in the AU$25,000 Challenge. Bjorn Li sits second in chips after eliminating Tobias Ziegler in sixth-place, while Manig Loeser held the chip lead for the majority of the final table until he slipped late and finished third overall. Dominik Nitsche and Thomas Muehloecker round out the final two chip counts.

The final five players will all be looking to capture their lion's share of the over AU$3 million prize pool, and with the title of an Aussie Millions Champion, and the ANTON Championship awaiting the eventual winner, here is how the payouts sit for the remaining players:

Play resumes in the Event #12: AU$50,000 Challenge at 2 p.m. (AEDT) with the PokerNews Live Reporting Team back to provide all the continued updates until a winner is crowned.

Another Title for Kempe as He Chops Aussie Millions $25K Challenge